Ask A Native New Yorker: Is It Wrong To Scream At Ivanka Trump If We See Her In Public?

This week's question comes from a New Yorker who would LOVE to get all Festivus on Ivanka Trump.

You saw the story about Ivanka getting yelled at on a Jet Blue flight, right? [Editor's note: According to one witness, Ivanka was not screamed at, contrary to initial reports, but an "agitated" JetBlue passenger did complain about her presence on his flight as he passed by her.] Is it wrong to do that? Like let's say I see her walking down Fifth Avenue, why shouldn't I get up in her face and scream at her about making life terrible for women, the poor, immigrants, and gays? She's in public, right? Don't I have a First Amendment right to speak my mind?

Listen, it's New York—as far as I can tell, you are legally entitled to scream like a crazy person at anyone you want here. But is it a good idea to harass the First Daughter elect on the street? That's a big no. It accomplishes nothing—less than nothing: it might actually damage any hope we have of seeing moderation in a Trump presidency.

I'll take the obvious first: ambushing Ivanka when she's flying on a plane with her kids is a bonehead move. It might have made the perpetrator here feel good to vent his emotions for a hot second, but what did it accomplish? It probably just scared the shit out of her, which will guarantee she's going to fly private for the rest of the presidency, and thereby not encounter any normal, everyday Americans to converse with about the effects of her father's policies.

What could this Trump-hating JetBlue passenger have done instead? So many things! He could have composed a thoughtful note on airplane stationery (ok, on a page ripped out of in-flight magazine), addressing his policy objections and urging Ivanka to use whatever power she has to advocate for the weakest groups in our society. Sure, it might not have worked; maybe she doesn't have that power or inclination, but it definitely had more of a shot of working than calling her presence on the flight "a nightmare." Or, if writing wasn't his style, he could have simply approached and said, "Ivanka, please use the power you have to help people and not to hurt them, thank you," and been on his way—if enough people did that I bet it would make an impression on her. 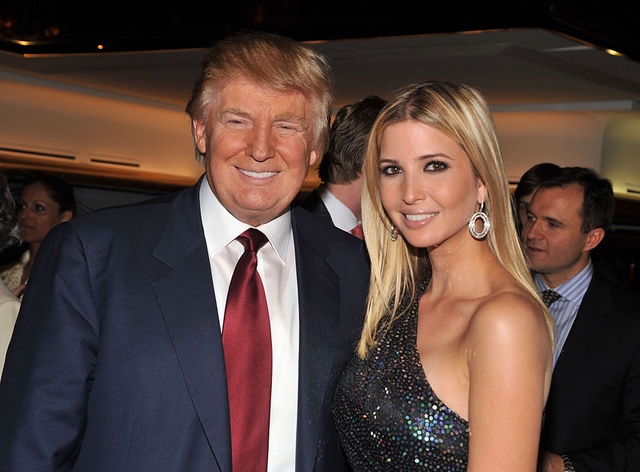 It's worth noting that Ivanka and her husband both appear to be the closest thing we have to liberal New Yorkers in Trump's immediate circle. We want them there, however imperfectly they represent our views. There are promising signs of them being less nut-jobby than Steve Bannon or most of Trump's cabinet picks. Take Ivanka's signature stance of the last year: family leave. That was one of the top priorities of a Hillary Clinton presidency. I have no idea what else she might be interested in, except to say that women with children generally aren't interested in nuclear war and might be a positive influence on her father should he decide to start jiggling the trigger.

Is being polite to Ivanka a form of collaboration? I don't think so—you can politely disagree while still disagreeing vociferously with someone, as we used to see in the genteel days of the Senate, before the Republicans flushed the old Republic down the toilet in their insatiable lust for power. It's more important than ever now to mark the difference between tone and content. For instance, we must ensure that our elected Democrats are universally opposed, recalcitrant, and hostile to any Trump agenda, no matter how tempting, because that's the only way to limit him to 2 or 4 years of unchecked power. We must insist on this, even if it means protesting outside Senator Schumer's house in Park Slope. But that's different than insisting that Schumer never talk to Trump, or be rude to him at every occasion.

Of additional note to New Yorkers, especially the few million of us who are Jewish, is Ivanka's Modern Orthodoxy. In an administration staffed with white-power types, we want as many Jews as possible in the West Wing. If that means waiving the nepotism laws to allow Ivanka and her husband to serve, then waive away—we want them in the Oval Office when someone suggests to Trump that it's finally time to do something about these New York Jews in the press. Is it terrible that we have to sacrifice a core principle of good government to have any hope of avoiding calamity these next four years? Yes it is. Yes it is.

In conclusion, we want Ivanka and her husband relaxed and not fearing attack from all sides every time they walk down a street in NYC or take a public flight. Please, for all of our sakes, conduct yourselves accordingly.

NB.: I think there's a strong argument this rule of polite but firm protest should apply even to Donald Trump himself. I doubt we'll be seeing him out of the Secret Service bubble, grabbing a Big Mac from the McDonald's at 58th and 3rd, but if you did, I still believe a measured "Mr. President, please don't send the jackboots in to seize the immigrants making your burger" would work better than an insane sounding shout of "Fuck you, you ambulatory sack of radioactive waste!"

#advice
#ask a native new yorker
#donald trump
#ivanka trump
#politics
#original
Do you know the scoop? Comment below or Send us a Tip