Ask A Native New Yorker: I Doored A Bike Lane-Spurning Cyclist, So Who's Really At Fault?

This week's question comes from a New Yorker who acted with courtesy and care exiting a cab, and still ended up dooring a cyclist.

Not new to the City, been here 10 years, but nonetheless:

I took a cab after work from Midtown to the Lower East Side to see a friend for a quick after-work drink. The driver and I come up on Stanton street and are taking a left onto Stanton to be dropped off on the corner of Clinton. As we are turning left (I believe we're on Suffolk) I see a a bicyclist turning against traffic onto Stanton behind us.

So being a good, new urbanist [Ed: Nü-urbanist?] Gothamist reader, I notice a nice, green colored bike lane, brought to us by our former billionaire overlord, to our left and tell the driver to let me off on the right side. The driver complies and veers slightly right and stops maybe 5 feet short of the intersection next to some parked cars on the right while there is a red light in front of us.

Admittedly, I did not look back but since I noticed the bright, wide bike lane and the say, 2 1/2 feet or less space between my car and the parked car next to us, I open my door. After about a half second, the same bicyclist I had spotted 5 seconds before barrels into my door.

Luckily, he had already begun to break and did not suffer any injuries. I was shocked and effusively apologetic and immediately thought of Gothamist and the sacrilege I had just committed. The bicyclist angrily moved on but then the driver came out and looked at the door which had some minor scratches on the inside. At this point, I feel terrible. (The Bernie supporter in me immediately thinks of the economic inequality of the situation). I hand him everything in my wallet which was like 20 bucks and he grumbles and walks away as I shunter into a lowly state of despair and embarrassment.

After a couple of beers to cool my nerves at a literal cat bar, I ponder though...Did I do anything wrong?

Yes, you did something wrong. You opened a car door without looking both ways first! New York is a very crowded, chaotic place. You can't afford to assume that the street is clear, just because a bike lane was on the other side—what if a kid suddenly stepped into the street and the bicyclist had to swerve suddenly into your way? 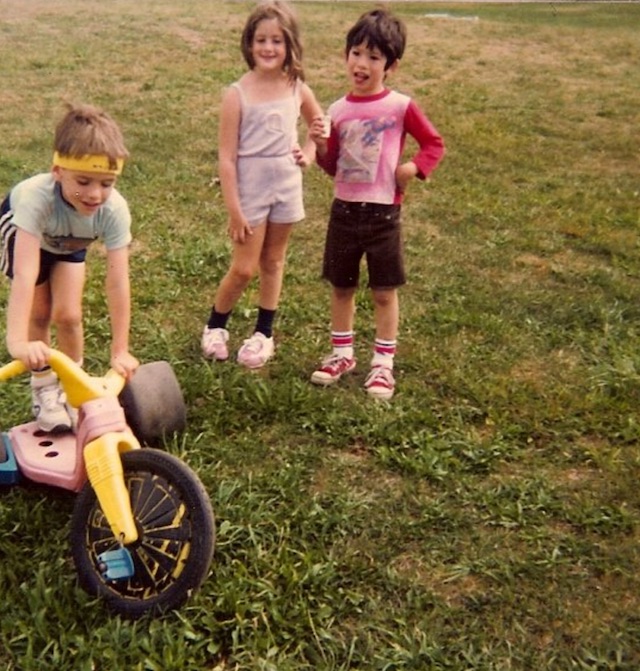 The law in New York is clear on this point:

Section 1214 of the Vehicle and Traffic law states "opening and closing vehicle doors - "No person shall open the door of a motor vehicle on the side available to moving traffic, and until it is reasonably safe to do so and can be done without interfering with the movement of other traffic, nor shall a person leave a door open on the side of a vehicle available to moving traffic for a period of time longer than necessary to load or unload passengers."

NYCRR- Section 4-12-(c) Getting Out of Vehicle: In New York City: "No person shall get out of any vehicle from the side facing on the traveled part of the street in such manner as to interfere with the right of the operator of an approaching vehicle or a bicycle."

Yes, it does sound like the bike operator was in the wrong, and should have been on green-painted bike lane on the other side of the street. He probably wasn't swerving to avoid a child or a bag of kittens, and was just riding recklessly. That's a dumb thing to do, and puts himself and others at risk. New York has a lot of idiots and goofballs doing stupid stuff—you still don't want to be the agent of their demise.

As you were wielding the more deadly object (in a car door vs. biker collision, the car rider is almost never injured, whereas the biker is sometimes killed), you bear more responsibility for what happened. If I was on the jury, I'd assign 60% of the blame, and as such you were right to pay the cabbie for the damage to his car, and lucky that the cyclist wasn't also injured.

In New York, we teach our kids to look both ways before crossing a street—even on a one way street! Cars sometimes back up a block, delivery guys pedal the wrong way, a pack of feral dogs might be rushing from that direction, etc—you want to be prepared. The same goes for any other situation in which you are entering a stream of vehicular or pedestrian traffic: getting out of a car, stepping off a bus, exiting a store. Take care and be aware!

It's worth pointing out that even when the cyclist is on the bike path, moving in the correct direction, the placement of most paths in our city (on the right side of the street, right up against the driver's side of the parking lane) makes it difficult to avoid getting doored. You have to ride right up along the left side of the bike lane to stay far enough out to avoid doors, and then, of course, you're that much closer to getting smushed by the moving cars. Solutions to this problem include putting the bike lanes on left side of the street (because most cars don't carry passengers, dooring happens less frequently on that side) and building protected bike lanes with large buffers on both sides on wide streets.

Please support these kinds of innovations when they come up for debate in your neighborhood. They save lives, protect car doors from damage, and will spare your conscience the agony that comes with accidentally causing a serious accident.

N.B.: Experienced New York bicyclists learn to be very careful around any cab or car that slows to a stop in front of you—we assume that any of those doors are about to fly open, and swerve/slow down accordingly. Using your bell (the one required by NYC law!) is also helpful to warn exiting people that you are there.

#ask a native new yorker
#bike nyc
#dooring
#original
Do you know the scoop? Comment below or Send us a Tip