Ask A Native New Yorker: How Vulgar Are You Allowed To Be On The Streets Of NYC?

This week's question is from a local resident who was recently scolded for salty talk on the Lower East Side.

An older man who appeared to be her father was with them, and he further admonished my friend by declaring, "Manners are a lost art!" The shocked and appalled family then turned onto Ludlow, and my friend shouted after them, "The Lower East Side is a lost art!"

What's your call on this? We were conversing in normal boisterous Friday night street level voices, but definitely not yelling. I didn't think we were rising about the ambient noise of the street. However, my friend is a big hairy Sicilian from Canarsie, so his voice probably travels further than your average transplant.

Has the Lower East Side become so vanilla that you can't walk around talking about oral sex on a Friday night without getting scolded by the gentry? Or is it just wrong to talk about sex or use profanity in public, lest we corrupt young ears? I'm sorry, I thought this was fucking New York?

Let me get this straight: you were just innocently walking down Rivington on a normal Friday night, skeed to the gills and spewing misogynist profanities, and out of nowhere, another New Yorker told you to shut the fuck up, and now your precious feelings are hurt and you think this is a gentrification issue? Seems to me that you got properly told off for acting like a jackass, and you should seize this moment as an opportunity to reflect and improve. 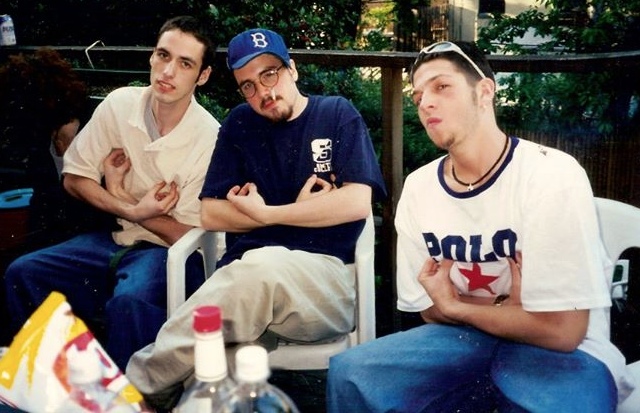 New York has a reputation as a loudmouth town, but this is an oversimplification. It is true that we New Yorkers are passionate and outspoken, and in public we express our opinions confidently, punctuated with appropriate gesticulations. But we are not rude or vulgar on the street, in the presence of strangers, and certainly never in front of children. So a loud discussion about your recent subway experience is fine. An obstreperous exchange about your recent sodomy experience is not.

Don't go getting your back all up about your right to personal expression. Freedom of speech in America has always had certain limitations, and despite our laid-back Dutch roots, we New Yorkers do not believe in shouting fire in a crowded theater, or shouting obscenities on a public street. If you are unsure whether your speech is obscene, simply apply the Miller test, and ask yourself if an average New Yorker would find that your speech "appeals to the prurient interest," "describes in a patently offensive way sexual conduct," and lacks "serious literary, artistic, political, or scientific value." Blathering loudly about fellatio on a busy street in LES seems like a classic example to me.

If you do cross the line, probably secondary to over-imbibing tequila shots at some terrible LES bar, take the scolding you will get in the spirit it was intended: as a message from God that, in the wise words of Samuel L. Jackson, "you need to cool that shit out—and that's the double truth, Ruth."

Is there an exception to this rule for nightlife districts like LES? Maybe for tourists who can't handle the excitement because they've never experienced it back in Des Moines, but not for people who live here. We have a reputation to uphold. Act better!

NB. The Buddhists talk about "right speech" as one of the parts of the Eightfold Path. In addition to not lying, not slandering, and not gossiping, they suggest that you should "abstain from rude, impolite, or abusive language." Acting like a drunk idiot ain't zen!