Ask A Native New Yorker: How Should I Deal With My Crippling Fear of Clowns?

This week's question comes from a New Yorker who's just a little freaked out about this creepy clown phenomenon.

I have had a serious fear of clowns since I was a kid and my babysitter made me watch IT while she smoked weed in my parents' garage with Jeff Collins, my next door neighbor bully asshole who turned the TV volume up really loud and told me he'd "shit in my mouth" if I left a five foot circle that he drew around me in the rug with his smelly Air Jordans.

All of this media coverage of creepy clowns is actually upsetting to me, even though I know most of it is manufactured bullshit. Because still, there WAS a knife-wielding clown on the subway the other day! And another creepy clown sighting in Queens. I feel like the clowns are multiplying and while I know I shouldn't be scared, every time I leave my apartment I'm worried I'm going to see one. If I do, how should I handle it like a native New Yorker? Has anything remotely like this ever happened before in NYC? How can I manage my clown phobia? Please keep my anonymous.

We'll deal with your phobia in a minute, but first I want you to think about this: how amazing must the city be doing that the leading subway story is now "menacing clown"? Twenty years ago that would've been like number 100 on the list after 99 stabbings, electrocutions, and sickening assaults, etc.

And the headline would be "Jackass In Clown Suit Beaten To Death By Straphangers," because back in the day, messing with anxious New Yorkers for fun generally ended in injury or death—whether by a Bernie Goetz with a gun or just a car full of riders with brass knuckles, shillelaghs, screwdrivers, mace, and box cutters. 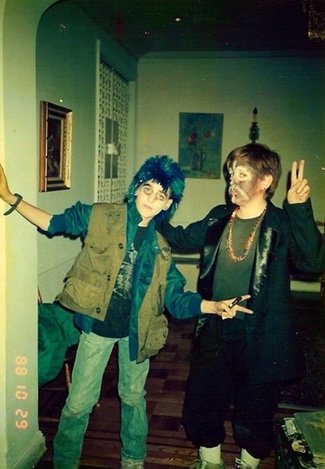 No, the mere fact that this incident might have occurred is great news. It means we're living in the safest New York of all time, and you should go about your daily business with the confidence that inspires. Your chance of running into a scary clown is minuscule today (because really, how many knifey clowns could there possibly be? 1? 3? 5?), compared to the chance of running into a very real mugger when I was a kid.

That's if this incident even happened. If you have an hour, read the history of moral panics and mass hysteria on Wikipedia. Whatever it is—satanic ritual abuse, chupacabras, backwards messages on Led Zeppelin albums—it always starts with one or two reports, which were usually bullshit made up by imaginative children or jackass teenagers.

Then the media picks up the story, and suddenly there's copycats everywhere—some of that is from highly suggestible neurotics suddenly thinking their mailman is a homicidal clown, but some of it will be more jackass teenagers dressing up in clown costumes with fake knives after-school for fun. The cycle repeats until it burns itself out, or a more pressing panic replaces it—maybe something like an actually psychotic clown being within four weeks and one flu infection from the presidency.

You know who this really hurts? All of the honest clowns just trying to make a living entertaining at children's birthday parties and hospital pediatric wards. They already face a baseline "coulrophobia," which scientists think has to do with their exaggerated features triggering an evolutionarily hard-wired "uncanny valley" revulsion response in many people. They hypothesize that back on the prehistoric savannah, features that look human-like but not quite real would have been worth avoiding when selecting a mate or partner to hunt with, because they could be signs of poor fertility or disease.

There are also cultural reasons why people don't like clowns. Much clowning violates western cultural norms about not embarrassing others and not dressing or acting in ways contrary to normal behavior. This cultural disgust has inspired many negative portrayals of clowns, from Stephen King's It to The Joker in the Batman comics and movies, and has also magnified these negative associations by linking clowns with deviants, murderers, and serial killers. This was particularly unhelpful for the clown industry after the John Wayne Gacy case came to light in 1978—imagine if, after the OJ Case, America suddenly decided that all ex-football players were probable murderers and treated them with suspicion. Now you know how your poor local clown feels!

Obviously, the media plays its usual pernicious role here. You want to guarantee some good pageviews on your local website, just throw "KILLER CLOWN" into a headline and watch the money roll in. Despite my many office speeches in defense of clowns, and the need to treat all deviant clown stories with skepticism, I regret that Gothamist has at times fallen into this very lucrative trap. I can only tell you that the clown-hating views of the editors do not reflect my own feelings, and urge you to meditate on the role of all media (particularly the tabloids and TV news programs) in spreading and profiting from hysteria.

So how should you react? In the same way you deal with any anxiety: simply by sitting with the feeling and not allowing it to change your activities in any way. If the clown thing has gone beyond that, and you find yourself doing something unhelpful like avoiding the subways, you need to get yourself some help, whether in the form of a good Cognitive Behavioral Therapy book about phobias, or better yet, by finding a caring therapist with experience in treating anxiety disorders.

One thing that any book or therapist will tell you is that the best way to deal with a phobia is to face it. If you actually had the one-in-a-million run-in with the scary clown, it would be the best thing that could ever happen to your anxiety! Either you would stand your ground and realize he's just a sad, pathetic loser trying to scare people, and get to watch with amusement as he gets wrestled to the ground by a few transit cops, or, in the almost certain-never-to-happen chance the clown tries to get aggressive with you, you'll have the pleasure of using your self-defense techniques to deal with the threat, and the satisfaction of being able to tell a great story for the rest of your life about how you kicked the crap out of a clown one time.

As neither of these situations is likely going to happen to you, I suggest a slower program of desensitization beginning with watching five minutes of clown videos on YouTube every day until your panic vanishes.

#advice
#ask a native new yorker
#clown hoaxes
#clowns
#creepy clowns
#fear
#original
Do you know the scoop? Comment below or Send us a Tip