Ask A Native New Yorker: How Do I Get Rid of My Roommate's Boyfriend? 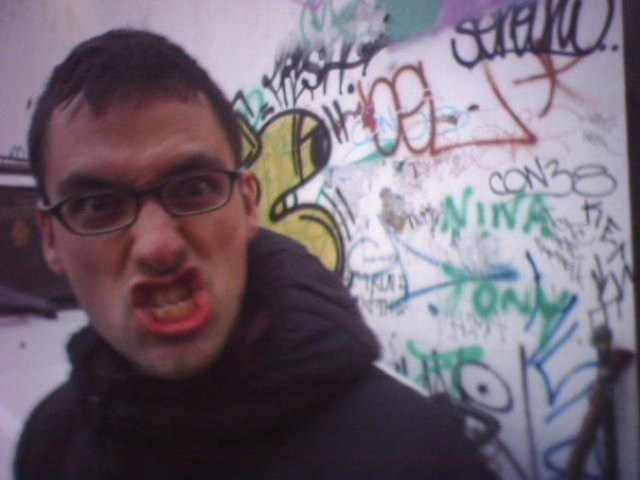 This week's question comes from a New Yorker with a Roommate's Boyfriend problem. We've all been there.

One of my roommates has a boyfriend who stays over nearly every single night. My room is right by hers, and I frequently hear them talking (and... stuff) until 3 a.m. or later. He also buzzes up late at night, which wakes me up.

I know I can ask the two of them to be quieter, but it also drives me crazy that he's over EVERY night—when I agreed to let her on the lease, I didn't expect I'd be adding two new roommates instead of one. What's the etiquette here? How many nights is too many nights? Does this dude not have a home?

You millennials disgust me! It's not your overpriced speakeasy bars, or creative facial hair, or the terrible, terrible, terrible music. It's the way you put up with shit and then whine about it in the most passive-aggressive way possible, instead of declaring VENDETTA and bringing the ultraviolence until you receive satisfaction.

This is why you are being oppressed by high rents in substandard apartments! This is why your college loans are so high! This is why unemployment amongst your cohort is like 50%! This is why you're on your third unpaid internship at Vice! In any generation with backbone, you'd be out in the streets lighting tires on fire and taking the mayor hostage. Instead, you just sit in your coffeehouses nursing a $6 latte and writing your "social media". Why is that? Why do you let yourselves get punched in the face repeatedly by life and just sit there and take it? Why don't you punch back?

Your personal lives are the same. Your roommate is violating the sacred human obligation of reciprocity. She is treating you unfairly! She is probably sitting in her room, post-coitally smoking some weed with her internet boyfriend and LAUGHING AT YOU right now. You know why? Because you let her! You need to march right in there, pull that nerd out of bed by his hair, and tell him to get out and stay out- this Tinder hookup is DONE.

Then you need to print out this roommate contract, which I already told you about at least three times, and force your roommate to sign it. You should probably add a clause dealing with the number of days of loud sex allowed each month, because she kind of sounds nasty like that. Also seven days of consecutive visitors is too many- for a proven apartment abuser like her, I say set the bar low, like one night every week max.

People are selfish. This is a product of evolution, which values cooperation and altruism only so much as it increases the likelihood of breeding, and passing your genes on to the next generation. We have a huge in-built tendency towards selfishness as a species- taking any advantage we can of resources in the environment at the expense of others, particularly those who aren't related to us by blood. This has forced the evolution of very strong "free-rider" detection and punishment tendencies, in which we strongly push back against anyone who shows the slightest tendency towards taking more than they deserve.

Except you guys, Generation Y. It's like Jack said in Fight Club: "I felt like putting a bullet between the eyes of every Panda that wouldn't screw to save its species." What is stopping you? Is it that you were too coddled in your youth, and you just never developed the vicious reflexive self-protection that we, the latch-key kids of the 80s, had to develop if we wanted to survive? Have you been beat down by this Great Recession? Is it just the malaise that comes with growing up in a society with too much money and not enough sense of purpose or threat?

Your grandparents had World War Two. Your parents had Vietnam. Your older brothers and sisters had the Nuclear Anxiety of the 80s, The Dot Com Crash, living their 20s in the shadow of 9/11 and two wars. What do you guys have? Cronuts and no jobs and the last ten years staring at a phone. Is this how you want to spend the rest of your lives?

I don't mean to be cruel, or to sound unzen. I just look back at last week's election and it seems like the exact same people who fucked up the country last time are coming back, precisely because young people are too lazy or checked out or dispirited to bother voting. It's like the vampires are at the gates, carrying signs that say "we're definitely going to kill you!" and you guys are still playing Minecraft or whatever. What does it take to wake you up? How immisserated must you become before you get angry and hit the streets? Remember: if you won't stand up to defend yourselves no one will!

#ask a native new yorker
#original
Do you know the scoop? Comment below or Send us a Tip