Ask A Native New Yorker: How Do I Cope With Road Rage While Biking In NYC?

This week's question addresses the frustrating and sometimes dangerous obstacles encountered by cyclists in NYC.

I commute via bike from Brooklyn to Manhattan and back every day. It’s good exercise but recently I’ve realized it’s taking a toll on my mood. The Jay Street corridor especially is a vale of sorrows: half the time the bike lanes are blocked by government vehicles, mostly from the surrounding courts, and even when the lane is free, pedestrians are constantly wandering into it without looking where they’re going. Then there are several blocks with no bike lane at all, where you have to play hopscotch with the buses and other traffic—I heard that someone got hit by a car around Fulton last week. Using your bell doesn’t work, and I’ve learned the only way to get someone’s attention is by screaming “hey watch out!”

I don’t want to become one of those really aggressive NYC bikers who’s always yelling “on your left!” at people, and I’m starting to think maybe the health benefits of biking are being outweighed by the stress. What should I do?

Get Out of The Way, Jerkoffs

You have my sympathy! This city can be a frustrating place to bike, and rage seems like an appropriate reaction to the dozens of provocations encountered in a daily ride, especially the entitlement and hostility shown by New York’s drivers, who park in the bike lanes, roll up two inches from your back wheel on narrow streets, and generally behave like your mere existence is an outrageous inconvenience imposed on them by hippie do-gooder save-the-environment types who don’t drive to and from Manhattan every day like a normal grown-up. In fact, I’d say it’d actually be abnormal not to feel paranoia and anger when facing these threats.

But try to direct your rage productively. An average bike ride includes dealing with at least a dozen irritating incidents. They range from the merely annoying, like the pedestrians who insist on crossing against the light, while looking in the wrong direction and blasting music through their headphones, but who can usually be dodged, all the way to the truly deadly, like the people who open their car doors without checking if a cyclist is approaching, or box-truck drivers running red lights at 60 miles per hour. Reserve your screaming for the more serious incidents or you risk having an aneurysm. In fact, maybe avoid screaming all together and get one of those whistles the bike-delivery guys carry—they’re much louder and less damaging to your health.

Or better yet, channel your negative energy into useful purposes, like attending community board meetings and demanding more bike lanes, safer street design, and less deference to cars. There are quite a few of these important fights going on all over the city, where NIMBYs are attempting to halt progress just to make parking their cars slightly less onerous. The most consequential battle is over the alterations the city is going to have to make in response to the L Train Shutdown early next year. That’s going to send thousands more people biking to and from Williamsburg on the bridge, and across town on and around 14th street, and if we don’t quickly add bike lane capacity straight across Manhattan Island and well into Brooklyn, we’re going to be looking at a very chaotic situation. You’ll feel a lot better if you contribute to positive, systemic change.

There will be times that you are tempted to respond to threats by acting badly yourself; say riding up on the sidewalk to avoid a blocked bike lane, or salmoning the wrong-way on a one-way street to avoid a blocked intersection. Do not do this: it only makes your commute more dangerous, and tars the reputation of all bicyclists. The fact is that although cars weigh about 1,000 times more than bikes, and cars kill approximately 100 times more pedestrians in New York City each year than bikers, the bad behavior of a few people gives some of our fellow residents the idea that cyclists are dangerous, and this really works against us when we need to fight for a new bike lane or street redesign. Be the traffic change you wish to see in this world! 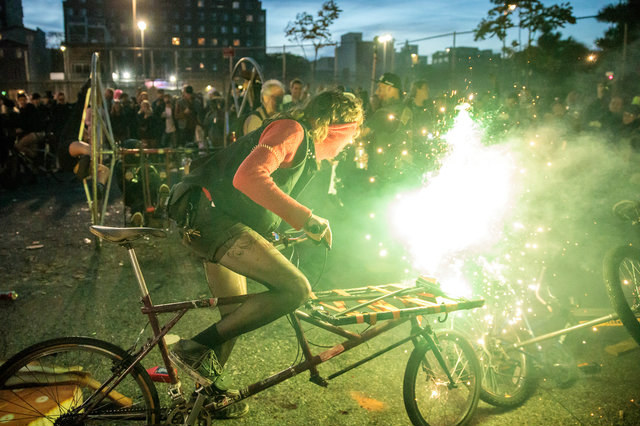 Commuting to and from work on a bike should generally leave you feeling good, from the exercise alone, if not the psychological satisfaction you get from helping the environment and making this city a more livable place. If, on balance, you’re not feeling good most days, consider changing your route and using the subway to skip the worst parts of your ride. I do this all the time by pedaling from Park Slope to the Hoyt-Schermerhorn or Clark Street stations, and taking the subway downtown from there. On the way home, I take the train back to High Street and bike home—this eliminates the whole Jay Street corridor, the Manhattan Bridge, and Chinatown, which I find are usually the worst parts of the trip. Citi Bike makes this especially easy: most days I just carry a helmet and leave my regular bike at home.

Or take a detour; it’s often worth it to go a mile out of the way for one of the city’s better paths, say Hudson River Greenway or Brooklyn Bridge Park, than it is to save 15 minutes and risk your life and sanity riding down Broadway or Jay Street or similar Boulevards of Death. There will always be some streets you can’t avoid, and there, try walking your bike to skip the very worst blocks. Yes, it’s quite annoying to have to dismount and push a bike on the crowded sidewalk, but it’s safer and you can use the time to meditate on how all human life is filled with daily frustrations like this, and this shared suffering connects you to the whole human race. By the time you are ready to remount you will have opened your heart; doing this a couple of times each day is a sure ticket to great wisdom.

Anyway, it’s still much better than taking the subway and getting trapped in a tunnel for an hour, which is now a near-certainty every single day.

To a safer city,

N.B.: If you can’t go to community board meetings, you can still make a difference by donating to Transportation Alternatives, a great not-for-profit that focuses on these issues.

#advice
#ask a native new yorker
#bicycling
#biking
#original
Do you know the scoop? Comment below or Send us a Tip