Ask A Native New Yorker: How Can I Avoid Being Slashed On The Subway?

This week's question comes from a New Yorker who's just a little freaked out by all the subway slashings.

It seems like a lot of people are getting stabbed and/or slashed on the subways (and also sometimes on the streets!). I ride the L to work, and most mornings it is so packed that at least one crazy person starts screaming "stop pushing me!" and I can't help but feel like one morning that's going to be followed by screams and a shower of blood. Am I overreacting here? How do you natives avoid getting stabbed by crazy people?

Fear not! According to the somewhat trustworthy statisticians at the NYPD, while slashing and stabbing attacks are up about 100% over this time last year, the numbers are tiny compared to the 5.5 million people who ride the subway on an average weekday:

There have been 37 assaults in the subway this year to date, according to NYPD Transit Chief Joseph Fox. Six were slashings—compared to three over the same period in 2015—and four were stabbings, compared to two last year. Of these, two resulted from robberies, and seven from an altercation—someone spilling hot coffee, for example, or telling another straphanger to keep their voice down.

That last part is very important! While the tabloids would have you believe that stranger attacks are rampant, and schizoid stabbers have taken up residency in every subway car, the reality is that most of these attacks are just normal New York City robberies or assaults. You weren't unduly worried about those when you moved here, right? So why start now? 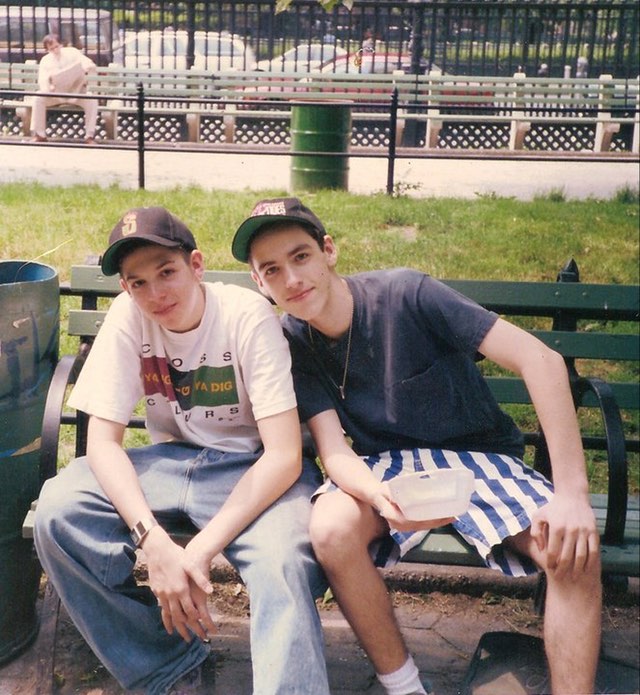 A young Jake Dobkin and friend, seen here moments before they were robbed at knifepoint. (Courtesy Jake Dobkin Private Collection)

Robbery is easy enough to avoid simply by maintaining awareness of your surroundings. I don't even mean paranoid hyper-vigilance! At this point, 90% of the people on the subway are listening to music or playing with their phones. It just means looking up once in awhile and making sure you know who's around you, and quickly relocating if you get a bad feeling about that one twitchy guy. Some amount of robbing might be inevitable in a city where so much wealth is packed so close to so much poverty, but why not let it happen to someone who's made themselves an easier target?

As for the assaults, those are avoidable with a little common sense. This morning I was on the F train when one raving lunatic got on at Smith and 9th—he immediately bumped into a large stock-broker type who was fiddling with his phone, and began a typical "look up from your phone you fuckin' cracker!" monologue. So far, no harm, no foul—but after the train traveled about one stop, the stockbroker decided he'd had enough, and proceeded to tell the guy first to "shut the fuck up," second that "I'm on my phone because I'm using it to make a lot of money, do you even have a job?" and third "I think you're mentally ill."

This was a classic unforced error: escalating a conflict with a crazy person, instead of shrugging it off and moving on down the car. Of course, things got immediately worse, with the screamer upping his volume, starting in with a "fucking bitch, don't condescend to me!" aria. Just as the surrounding passengers were attempting to scurry away, and a few of us natives were booting up our cell phone video cameras, the train pulled in to Jay Street and both guys got off. If we'd been delayed it would have definitely been a brawl (and a priceless viral video!).

Sure, I understand that it's annoying to get screamed at by a crazy person, but you have to be pretty stupid, insecure, or insane yourself to get upset by it. Take a deep breath, summon up some sympathy for the poor, afflicted soul who's causing the trouble, and then feel lucky that you had the presence of mind to avoid a preventable altercation. Seven out of ten of this year's subway stabbings and slashings happened because people ignored this advice! Don't let that happen to you.

This is the point in the column where I normally point out that the New York Post and The Daily News are owned by conservative billionaires, who enjoy preying on your fears to sell papers and advance their agenda (most importantly, dethroning De Blasio in next year's election by convincing you he has no handle on street crime.) This is, actually, especially true in their coverage of this stabbing phenomenon. But I want to add that these tabloids also hate mass transit, because it is used primarily by the poor and middle class, and is subsidized by the taxes and car tolls paid by the wealthier.

Consider for a second the amount of coverage that's been given to these subway attacks, rather than the 15+ people who have been killed by reckless driving this year. Why does a comparatively less frequent and less deadly crime get so much ink? One more guess: the perpetrators on the subway are often homeless men with darker skin. Could it be true that the New York Post prefers to print stories demonizing minorities? It's at least a possibility!

Don't fall for it. Our subways and our streets are safer now than at any time in the last forty years. You are much more likely to die of suffocation on a packed L train than from a stabbing, and there are many, many, many problems worth worrying more about—for instance, what happens to your commute when they shut down the L-Train tunnel for three years.

N.B.: In the early '90s there was briefly a "boxcuttter" panic. I remember getting held up at least twice (casualties: one Jansport backpack, one complete pizza pie) on the way to and from school by kids wielding that kind of knife. But then the city made it harder for minors to buy boxcutters at hardware stores, and you hardly hear about boxcutter slashings any more.

#advice
#ask a native new yorker
#crime
#subway
#Subway Slashings
#original
Do you know the scoop? Comment below or Send us a Tip