Ask A Native New Yorker: Can I Tell The Bodega Cat To Beat It?

This week's column has two bodega-related questions. The first comes from a New Yorker whose allergies are preventing them from enjoying one of the city's best resources.

I recently moved to Harlem in the 150s, and, as you might expect, there aren't that many places to grab groceries/sandwiches/beer/anything in my neighborhood that aren't bodegas.

Here's the problem: the four closest places in the area, including the one right at my corner, have cats, and their hair gets everywhere. I'm allergic to cats, and this makes grabbing a bag of chips and a 24-ounce Coors Banquet a miserable experience for me. I start sneezing, wheezing, and itching all over whenever I pop in.

The closest bodega I have found that doesn't have a cat in it is 6 blocks away from me. I understand from the internet that bodega cats are sort of a treasured little oddity in New York, but I don't understand why they're tolerated when they're definitely illegal and send people with cat allergies—there are a lot of us—into a state of misery.

What's the right way to tell the owner of the bodega on my block that I'd prefer it if I didn't keep it around? Or should I just keep my gentrifying mouth shut?

Sure, just walk in and explain yourself: "Hello, shopkeep! I am new in the neighborhood, and I was simply wondering if you'd be willing to evict your beloved deli cat, as its presence offends my delicate sinuses. Now would you please point me towards your kale aisle?"

Gentrification may be unstoppable, and you may be its unwilling agent, but that doesn't mean you have to be an asshole while you are blithely at work. Be a thoughtful arriviste! Keep your head down for a few years. Don't ask for accommodation. Remember: when possible, muggers prefer to stab the rude gentrifiers first.

Though the law is on your side, it's a dumb law. Bodegas stuff a lot of food in a small space, and that's always going to attract vermin. Operators are then faced with a Catch-22. Gothamist reported on it in 2007:

"Deli and bodega owners face fines of up to $3,000 for having a cat or cats in their establishments, but they also face fines of $300 for the discovery of rodent fecal matter. Lost inventory is another cost, as rats and mice like to chew through containers and eat the food that is left overnight on shelves like a rodent buffet."

Personally, I prefer cats to rats. Cats are naturally clean animals, and if their litter boxes are kept in the basement and cleaned daily, there's no issue with smell or Toxoplasmosis. You can't say that about sewer rats, which are known plague carriers. You want to think about how many of those have rubbed up against the Coke you just bought?

Yes, cats do cause allergies. But allergies are eminently controllable. I know this from personal experience. I am violently allergic to cats, but about ten years ago my wife really felt STRONGLY about getting one, and I sucked it up. After a few weeks of almost clawing my eyes out with itchiness and waking up in the middle of the night wheezing from the cat sleeping on my face, and fully aware that if I made her choose, she'd probably pick the kitten, I began allergy treatment.

Long story short, weekly allergy shots, combined with Nasonex and a rigorous program of never touching the cat and changing my pillowcase every single night, has allowed me some semblance of normal breathing in my home. As a bonus, the treatment has also given me some resistance to tree-pollen and dog dander. I'd recommend it if you're similarly afflicted.

In conclusion, it is unzen to resent the world for not changing to suit your needs. Long term you will be happier if you adapt yourself to its imperfections. Or, I don't know, try Amazon Prime 1-hour delivery—I think they're serving Harlem now! 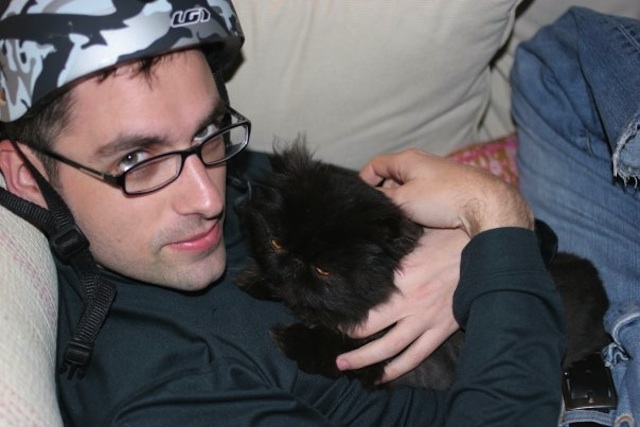 This may be a question with no answer but I've been very curious: why are there so many bodegas in my neighborhood?

I live in Hamilton Heights near City College, and there are 4 bodegas between 135th and 136th on Broadway alone. There had been three and then a fourth one opened up last year. How can they all make money if there are so many of them in one area? Don't get me wrong, I'm not complaining.

I'm happy to spend my money locally. But they all sell basically the same things, and with rising rents I just can't wrap my head around how that makes any kind of business sense.

I've seen two bodegas on opposite corners, but I was at a loss to explain how four bodegas could remain open on a single block. So I turned to Chris Havens, my commercial real estate agent, who always knows what's up with phenomenon like this. He emails like Yoda:

Yo Jake. Very dense area. 137th Street #1 Train. Lots of development in the area. Supermarkets lacking? Folks don't have to spend time in line. These businesses are 24/7 high margin operators. Often serve their ethnic groups which can be distinct and different bodega to bodega. Beer, lotto, candy, cigarettes. High volume. Only cost is rent, rest is family staffed. You will find that there are people who won't cross Broadway to shop. They go to the same one.

So there you have it. And I agree with you—be thankful! Some people live on blocks with just one bodega, or worse, a corporatized 7-11!

#ask a native new yorker
#bodega cats
#bodegas
#original
Do you know the scoop? Comment below or Send us a Tip
A new Gothamist is coming! We’ve moved comments over to our beta site. Click here to join the conversation and get a preview of our new website.