Ask A Native New Yorker: Can I "Save" My Shoveled Out Parking Space?

This week's question comes from a New Yorker who's frustrated about "losing" a parking spot he spent hours digging out after the blizzard.

I drive to work and after the blizzard I had to go out and spend an hour shoveling out my car while nearly contracting frostbite. This was serious work—snow plows kept coming by and re-snowing me in! So like all the locals on my block I took a couple of chairs and put them out in the space, to hold it for when I got back. But when I got back that night someone had moved the chairs and taken my spot!

What's the right thing to do here? Am I allowed to slash their tires or what?

While I sympathize with your frozen suffering, you are in the wrong here in several ways. First, you own a car in New York City, home of greatest mass transit system in the world. Second, you decided to use this car the day after the second-worst snowstorm in the history of the city. Third, you fundamentally misunderstood the system by which native New Yorkers defend parking spaces. And fourth, you are contemplating a potentially suicidal attack on a stranger's car, instead of dealing with the root of the problem, which is your increasingly poor decision making.

Yes, there are transit deserts in Queens from which it is still inconvenient to get to and from work without a car. You may legitimately be saving yourself 90 minutes of commuting time if you live in College Point and work in the Rockaways or something. But shoveling your car out took you 60 minutes, and you probably wasted at least another 60 looking for a new spot and shoveling it out—if you could even find one and didn't end up parking at a garage. The rational choice here would've been to take mass transit: you're really telling me there was no way to get to work in less time on some combination of bus, subway, LIRR, and taxi? 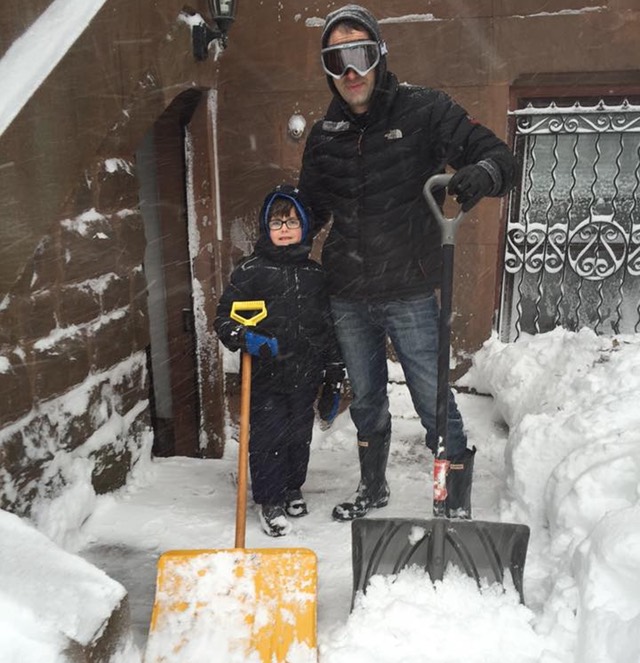 Nothing compelled you to shovel out your car: alternate side of the street parking has been suspended all week. I see plenty of cars on my block whose owners made the smart decision to shelter in place, and by early this morning they had mostly melted out of their ice tombs and seemed no worse for wear. Or certainly not worse off than the cars whose cruel masters forced them out on to the ice covered streets, to play roller derby with Sanitation Department snowplows. Do you even have chains for your tires, bro? If you don't feel sorry for your car, feel sorry for the pedestrian you'll splatter all over Queens Boulevard when you go skidding out of control.

You correctly noted that some people on your block successfully defend their storm spaces, but you only noticed the iceberg tip of our complex native space saving system. It's not simply enough to throw out a couple of chairs and waltz off to work. You've got to have a whole team of people on the block ready to scream at interlopers. You know, your loudmouth grandma who just loves to spend the whole day glaring out of her window at passersby, or your shifty uncle who never seems to work except when he picks up a few bucks shoveling out sidewalks for the neighbors. Without this kind of serious backup, your flimsy chairs mean nothing!

It's highly likely that as soon as you drove off, some of your neighbors, correctly observing that you were a recent arrival who hadn't earned snow privileges yet, quickly called around to see if any of their friends needed a space, and ganked your precious spot. You should keep this in mind before you declare jihad and go slashing anyone's tires. The block has eyes! Sometimes things other than tires get slashed. Like your face, maybe.

Sure, a system of saving shoveled-out spaces backed by an implicit threat of violence is a medieval, tribal code that has no place in a modern city like New York. A fairer rule would require everyone to shovel out their own car by the morning after a storm, just like the city requires for residential sidewalks, so there aren't a deficit of shoveled-out spaces. We could combine it with a rule that says private cars have to stay off the road for 24 or 48 hours after a storm to give everyone time to shovel out, and for the snow moved out to melt. But I have a feeling that the natives, who seem to be doing fine under the current regime, may oppose modifications like that, and who's going to change their minds? You, Mr. Joe "Subaru Forrester" Gentrifier?

No, the change you need to make is an internal one. You must meditate on your own selfish dependence on a gas-guzzling, environment-polluting, free parking-dependent, unused 97% of the time, waste of money means of conveyance, and ask yourself if, in the spirit of generosity to your neighbors and to Mother Earth, can you find a better way to get to work? If you can't, can you at least feel a sense of positive satisfaction that you helped someone out by delivering them a snow-cleared space, instead of embittered indignation over a theft of a space you never had any right to own?

Try it! It's a lot less painful than getting stabbed!

NB.: This is yet another New York problem that will be solved once we replace our terribly wasteful system of private cars with a civic fleet of communally owned RobotUbers sometime in the next 10 years. Before a storm, the robot fleet can simply be programmed to seek shelter in indoor garages, or at easily defrosted lots at the city outskirts, ready for service again as soon as the plows have cleared the streets.

#ask a native new yorker
#blizzard 2016
#shoveling
#snow
#original
Do you know the scoop? Comment below or Send us a Tip