Ask A Native New Yorker: Can I Ask A Dog To Give Up Its Subway Seat?

This week's question comes from a subway rider wondering what to do about the problem of dogspreading.

I was on the subway yesterday and there was this super-cute dog on the seat right in front of me. It was well behaved, even with all the attention it was getting, but it was not in a case or a bag, and clearly not a professional dog—it didn't have one of those harnesses with the "please don't pet me, I'm working" sign. The train was pretty crowded, and there were humans, like myself, standing up after a long day of work.

Would I have been justified asking the dog for its seat?"

Two Legs on the L Train,

You shouldn’t have to ask the dog, or its owner, for the seat, because the law is quite clear on this: “no person may bring any animal on or into any conveyance or facility unless enclosed in a container and carried in a manner which would not annoy other passengers.”

There is of course an exception for "working dogs for law enforcement agencies," "service animals," animals-in-training, and the like, but all of them "must be harnessed or leashed." The law clearly does not include “emotional support” dogs, and no, that letter you made your therapist write (or bought from the internet) to get your canine friend on airplane won't help.

This is a just law: our subways have always been crowded, and putting a sensitive animal into that environment is just asking for trouble. Take that case a couple of weeks back where a pitbull riding uncontained on the 4 train grabbed a woman by the sneaker and wouldn’t let go. A lot of people were quick to blame the dog, on account of its breed, but if you actually look into what happened, it’s clear that the responsible party is actually the dumb human who brought the dog on to the train and gave it a seat on the bench. Then a second dumb human started a fight with the first over the dog’s rights to the seat and then reportedly tried to remove the dog by force. In that situation, if you’re a dog, of course you’re going to fight for your seat and protect your owner—it’s just natural instinct.

Even if the dog hadn’t been put on the seat, just bringing it on the train without a container creates an environment rife with dangers. What if a bunch of showtime dancers show up and spooked the poor animal? What if someone, in the crush at rush hour, stepped on its paw? What if one of the dozens of loud noises a subway makes every minute startled the dog, and the owner lost his hold on the leash, and the dog made a run for it? What if three dozen highly allergic school children board the train, fresh from their trip to the American Museum of Natural History, and the dog's dander sends some of them into anaphylactic shock? I could go on—the subway is a Hieronymus Bosch painting worth of weird people and situations and many of them end with the dog getting hurt, or injuring a person, or both.

That does not appear to have stopped an ever-increasing number of pet owners from bringing their animals on the train. Obviously, it’s a lot cheaper to get to the groomer on the L train than in a cab, and, with the police writing only 85 summons for illegal critter transport in 2017, there’s not a whole lot of incentive to follow the law. It will probably take some horrible incident where someone or some creature gets killed before the NYPD will really crack down. If you have a dog, or cat, or boa constrictor, consider leading by example and buying a correctly sized carrier—if your pet is too large to fit in one, that’s probably a sign that it shouldn’t be on the train in the first place. 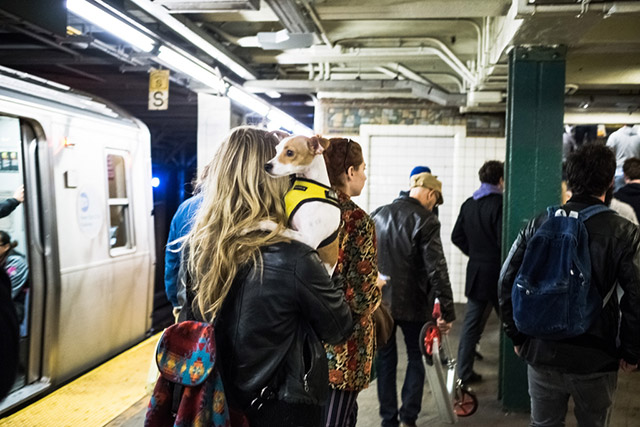 What should you do if you see a dog, or its owner, doing the wrong thing? The same thing New Yorkers always do: Consider the situation carefully and run a fast calculation if it’s worth the trouble. You basically have two potential types of owners—the oblivious and the crazy. If it’s the former, a simple “excuse me, the seats are only for animals wearing pants” will do the trick, but if it is the latter, you could be seeing yourself in a viral WorldStarHipHop video very soon. Sometimes appearances can be deceiving: a vicious looking pitbull can be quite gentle, and a semi-normal looking leash-holder can turn out, in a second, to be a raving lunatic. So if the subway car is empty, or the dog is sitting quietly between its owner’s feet, perhaps let it go.

If not, at least exercise some common sense: never touch an animal without its owner’s permission, even if it is sitting on a subway bench. Give the dog and its owner enough distance that neither can lunge at you, and then speak your request politely and loudly: “Hi! I know your dog is probably a seasoned commuter and is tired after a long day of dog work or studies, but it’s really unhygienic for an animal to sit up there.” Etc. If you are rebuffed, take it with the equanimity that we natives have developed after many years of seeing people behaving badly in transit. Or go tell the conductor, an MTA employee, or (if it’s safe) take a picture and send it to 311—likely no one is going to do anything to help, but maybe it’ll make you feel better.

The larger issue is transit funding: our public officials have underfunded the system for decades, and that bill has been increasingly coming due each year. The more signals and trains break down, the more crowded each subway car gets, and the higher the likelihood of human or animal conflict. There are many ways our government could fix this problem: allocating more of the New York State DOT operating and capital budgets to mass transit systems, instead of far less-efficient and environmentally-damaging roads for cars; we could raise our income, sales, or gas tax an incremental amount; or we could reinstate the commuter tax so people coming into the city from the suburbs pay their fair share.

Or, I don’t know, make all dogs buy MetroCards?

#ask a native new yorker
#dogs
#subway
#subway etiquette
#original
Do you know the scoop? Comment below or Send us a Tip