Ask A Native New Yorker: Are The Basketball Uniform Fundraisers a Fraud?

This week's question comes from a New Yorker who is tired of kids asking him for money for their basketball teams.

You wrote a recent piece on the panhandling moms begging with kids: in a similar vein, and from one native Park Slope guy to another: what's the deal with all these teenagers holding clipboards asking for money for their basketball teams? As a lifelong Brooklynite, I basically know that it's a scam, like the moms with the babies and the kids selling candy on the train, but what the fuck?! It's year in and year out. It's not like the old guys who panhandle in front of every fucking grocery store or bank; these kids get aggressive. What to do? Call the cops at the 78th precinct? 311? Call Brad (look at my garbage cans) Lander?

Seriously,
Sick Of It 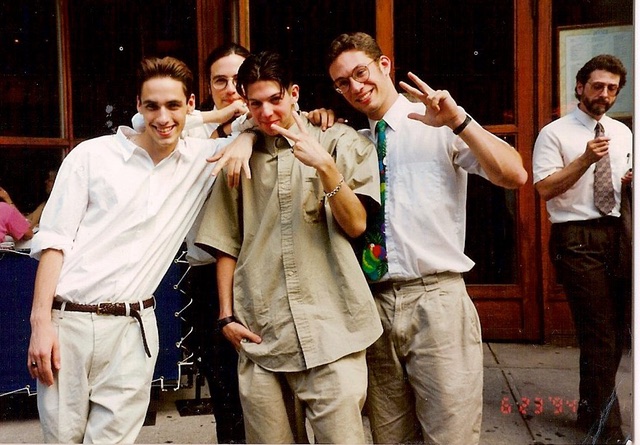 Yes, of course it's a scam. It was a scam the first time Gothamist answered this question, way back in 2004, and it's a scam now. Think about it: during your time growing up in the city, do you remember any school team asking you to go approach strangers on the street for money to fund uniforms or a school trip? Of course not! Imagine the teacher who sent kids out on a mission like that—they'd be thrown in a rubber room and charged with endangering the welfare of minors. Then the parents of the children impressed into service would sue the city for violating their civil rights, and then the New York Times editorial board would write an impassioned series of op-eds inveighing against the exploitation of youth.

More proof that it's a grift: the same kids work the same corners week after week. How much does a jersey, a pair of basketball shorts, and sneakers cost? $100? $150? Here's a NYC native math problem: if there are 15 guys on a team, and five are available to work three hours after school every day, five marks people donate per team member per hour, and the average donation is $5, how many weeks should we expect to see the team working the corner? The answer is (approximately) one week. So if you see these guys two weeks in a row you know they're running a con.

Even if this was a legitimate effort to raise sports funding for our local public schools, you still shouldn't support it, for the same reason you shouldn't give money to professional panhandlers or NYPIRG sidewalk blockers: it encourages street behavior that makes the city worse, and it's an incredibly inefficient way to give money to charity. Instead, try DonorsChoose, where there are currently 24 legitimate NYC sports-related school projects looking for funding. And unlike with random strangers who approach you on the street, you know money given to DonorsChoose will reach its intended recipients—the group currently has a four star rating on CharityNavigator.

As to the question of what to do about these teenage basketball grifters, I think a call to 311 or the local 78th Precinct is more than enough. For youthful offenders, we must temper justice with mercy. Being annoying is not a crime in New York City—if it was, most of us would be in jail. And you have to give them a little grudging admiration for their dedication to a scam with a real local pedigree, and for the salesmanship they demonstrate while practicing it. It's too bad that energy can't be directed into a more socially acceptable gig that rewards the same lying and hustling skills—say real estate brokerage, or selling subprime mortgage bonds to German banks. Maybe Goldman Sachs should start a new training program!

Or look at the bright side: the money being cadged here is mainly coming from naive tourists and newly arrived transplants, as no grizzled native would ever fall for a grift this obvious. While telling falsehoods for money is morally deplorable, and obtaining $5 by trick may be considered "petit larceny" by our local District Attorneys, the cash lost here is small, and it is destined for the pockets of (a few of) our city's underprivileged youth. Certainly in the hierarchy of frauds, this one ranks close to the bottom—yes, above the guys selling M&Ms on the train to raise money for uniforms (because there at least you get the M&Ms), but well below the really evil grifters practicing the pigeon drop and broken glasses scams.

Forget about these kids! We need to direct our attention, and the energy of our police and prosecutors, towards the real scammers around here: the real estate developers ever-scheming to price us out of the city, the corrupt politicians who abet them, and the conservative politicians who underfund our city schools (and their basketball teams) so that their upstate districts can get more than their fair share. Those are your true enemies, and hopefully they'll get what's coming to them soon.

N.B.: The Mayor and City Council just approved a budget this week that will fund some 60,000 summer jobs for our local youth, along with 6,000 year-round jobs. The pay probably won't match what you can make as a basketball uniform hustler, but it will provide a legal alternative for some kids.

N.B. 2: If you're interested in the history of New York scams and grifts, two great books are David Maurer's The Big Con, and Luc Sante's Low Life.

#advice
#ask a native new yorker
#basketball teams
#scams
#teenagers
#original
Do you know the scoop? Comment below or Send us a Tip