Ask A Native New Yorker: Are All NIMBYs Racist Assholes?

This week's question comes from a Brooklyn resident who feels Gothamist's coverage of recent incidents in Brooklyn Bridge Park have portrayed local residents in an unflattering light.

I live in Brooklyn Heights and I've read with some interest your recent stories on the Brooklyn Bridge Park Pier 2 basketball courts, the essence of which seems to be to accuse anyone in the neighborhood who is worried about rampaging teenagers of being a racist NIMBY.

I am not a racist! I just don't want to get hit in the face by a 15 year old looking to impress his friends while he walks home from Pier 2. Is this so wrong? Doesn't a neighborhood have a right to speak out on issues of safety? Are there any instances in which you believe NIMBYism is justified?

It's my experience that any letter than contains the phrase "I'm not a racist" is usually sent by someone who is actually kind of racist. I'm not saying you are a virulent racist, in the way a KKK member is racist—I'm just saying that your distress is based primarily on fear of black teenagers walking through your white neighborhood, as opposed to a justified concern based on actual crimes being committed by these kids.

As it happens, I bike through Brooklyn Bridge Park every day around 5:30 p.m., just when a lot of these adolescents are leaving the basketball courts at Pier 2 to get home. Most days you see packs of 5 to 10 youths horseplaying as they make their way towards the Joralemon or Old Fulton Street exits from the park. If you haven't been in New York City long, or have only lived in a lily-white neighborhood like Brooklyn Heights, their roughhousing can be deceptively alarming.

The boys, especially, like to play fight, and sometimes enjoy taking a seemingly threatening step towards the bikers and tourists making their way through the park. There's a fair amount of name calling, and once or twice I have had a water bottle thrown in my direction. It's not uncommon for these groups to take over the whole bike lane, forcing the riders to swerve to the other side. That's about as bad as I've seen it get, though—certainly no worse behavior than you see outside any NYC public high school around 3 p.m., and nothing that would make a native New Yorker fell unduly nervous.

But Jake, you might say, what about those shots fired last year? What about the fights that have caused the police to clear the basketball courts and close Pier 2 a few times in the last couple of months? I am aware of these incidents, and the vastly increased police presence it has brought to the park, and nothing about it changes my opinion. When you have a lot of NYC teenagers in one place, you will have fights, and even (very rarely) gunplay. The greatest danger is of course to the kids themselves, not to neighborhood residents outside the park, and the NYPD has already put the additional forces in place. What more do you want? 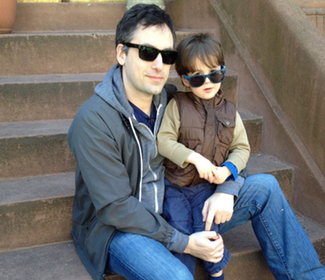 The hyperbole from residents—with comments like "Pier 2 should probably no longer be basketball courts... considering the types of people it seems to attract," is completely asymmetric to the threat these young teenagers present, and can only be explained by the color of their skin. The solution here is not for us to rip out the basketball courts, but for the surrounding neighborhood to get used to the daily presence of black teenagers. Over time, as fears of increased crime are revealed as hysteria, the residents will grow less racist and alarmed. This will be an excellent learning experience and a chance for real spiritual and moral growth!

This NIMBY fight was an easy call—rich neighborhoods must do their part to share amenities like beautiful waterfront parks with the poor people who live nearby. But what of the other Not In My Backyard struggles going on? The number of these fights seems to have increased of late, while the stakes seem to be ever diminishing. In the old days our grandparents were fighting the Lower Manhattan Expressway or Westway—today we're fighting over stuff like a 7-block bike lane through Clinton Hill.

Maybe it's because there aren't that many big projects any more—in the old days Robert Moses would wave his hand and tear down half a borough—but today at most we see a few megadevelopments like Hudson Yards every decade, and with so much money and political support behind them, these have proved very difficult for NIMBYs to stop. So perhaps they've begun focusing more energy on the fights that they can actually win, even if that means going nuclear on some piddling shit.

There are three important questions to ask when evaluating these fights and deciding which side to support. The first is whether the project is good for the city. The second is whether the project is good for the neighborhood. If the answer to both questions is "yes," then NIMBYs are in the wrong, and you should oppose them. For example, the Brooklyn Bridge Park fight discussed above. The basketball courts at Pier 2 are good for the city, because our kids need places to exercise and hang out after school, and Pier 2 was previously a terribly underused warehouse that did nothing for anyone. The courts are good for the neighborhood because the residents can use them too, and the influx of outsiders gives them a wonderful chance to be less racist. Everyone wins! 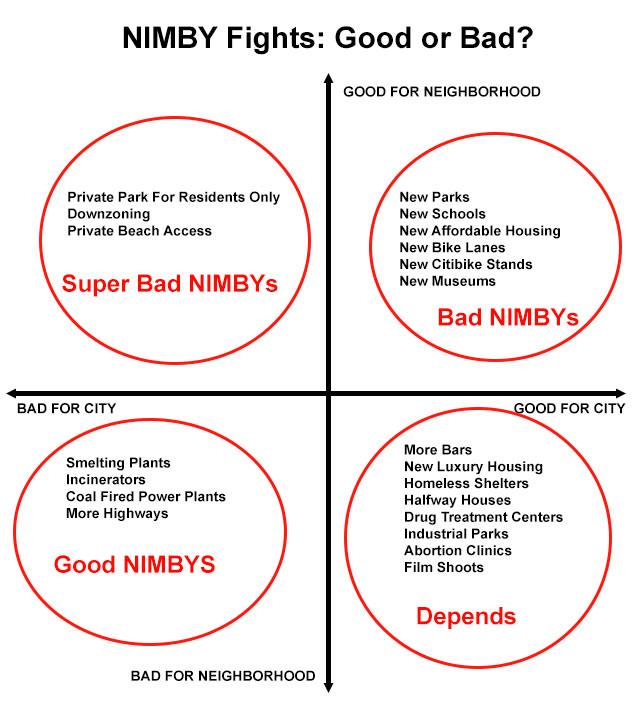 Similar arguments can be made for new parks, new schools, affordable housing, and museums—these are net positives for residents of both the neighborhood and the city at large, and opponents are acting against their own self-interest out of fear or selfishness. In the former case, that often includes racist worries about the kind of "outsiders" who will use the new amenity, and in the latter, an unwillingness to make even the smallest sacrifice (one less parking spot on a block, driving 5 mph slower, etc.) for the greater good. For the benefit of the city, we must take dead aim on these NIMBYs, get them in the crosshairs, and take them down.

But these types of fights do not represent the full universe of NIMBY behavior. There are cases when some oil company wants to lay a shale gas pipeline under the neighborhood, or the government decides to erect an incinerator because the prices for shipping our garbage to Pennsylvania have grown too high—in these cases, the proposed project will have a negative impact on the environment of both the city and the neighborhood where it will live, and we should all applaud the good NIMBYs trying to stop the project, and join them if we can.

A third set of fights: when a proposed project is good for the neighborhood, but bad for the city. These are very rare: we almost never see a case of public funds being used to build private parks or repair boardwalks on private beaches, because the optics of these fights are terrible and no politician wants to be associated with it. Downzoning is an interesting example here—good for the neighborhood because it prevents overcrowding at schools and increases property values by limiting new supply, but bad for the city because it contributes to the dearth of affordable housing. In these fights, a thoughtful person must always oppose the NIMBYs—one problem is that very few people from outside the neighborhood will take the time to fight, and no one in the neighborhood is going to vote against their own self-interest.

Finally, we come to the hardest NIMBY arguments to judge: projects that are legitimately good for the city, in that they add some necessary good or service that the city needs, but bad for the neighborhood, which will have to bear some negative local effects. These are the classic fights over homeless shelters and drug treatment centers, halfway houses and abortion clinics. Sure, the NIMBYs will say, these are important things, but they just aren't right for this neighborhood.

In these cases, we must ask a third question: has the neighborhood borne its fair share of the burden of hosting these projects? It would be unfair to add a tenth homeless shelter to a neighborhood already hosting nine, but not to add a first to a neighborhood that currently has zero. The exact definition of "fair share" can be argued over, but we must be especially careful not to allow rich neighborhoods to shove all the costs on to poor ones—for this reason, any NIMBY fight taking place in a neighborhood like Brooklyn Heights must be looked at with a very critical eye.

Community Boards are notoriously bad venues for a fair hearing on NIMBY arguments, as they are normally controlled by a very thin slice of the neighborhood populace: the richer, older, real-estate owners, who have connections to the political establishment and time to attend the meetings. The testimony from these types, and the decisions reached by these boards, must be carefully weighed against the often unspoken needs of poorer, younger people, who may not have the time or wherewithal to get to these meetings.

For this reason, we often must look to the statements of third parties, like transportation advocacy groups, and the testimony of unbiased technocrats, like the engineers at the DOT, before we draw any conclusions. It's very easy to defer to the people screaming the loudest in these fights—but if we did, the city would become an even more stratified place than it already is, with the rich neighborhoods increasingly functioning as gated communities with no connection or responsibility to the rest of us.

So in summary, no, not every NIMBY fight is wrong, and not every NIMBY is a racist or classist asshole trying to hoard all the benefits of living in a city, while avoiding all of the responsibilities. But many are, and it is incumbent on the rest of to fight these bad NIMBYs with everything we've got, lest they ruin our city for future generations.

N.B.: An underreported recent phenomenon is the rise of YIMBYs: groups advocating for more building, especially of new affordable rental housing. It will be interesting to see if these groups increase in prominence as the bubble in New York City housing prices and rents continues its seemingly inexorable rise.