Ask A Native New Yorker: Am I A Jerk For Ignoring The Flier Pushers?

This week's question comes from a New Yorker who's fed up with people pushing fliers in their face.

I am in an ethical stalemate. It has to do with The Flier People*, those ubiquitous NYC violators of personal space. Do I take the flier? Do I smile while declining to take the flier? Do I ignore it completely? This question may seem trivial, but I think some fundamental principles of social, economic, and environmental interaction are at stake.

When I was younger and newer to this bustling metropolis, I used to give sidewalk attention-grabbers the time of day. It seemed that merely because somebody approached me, I was obligated by human decency to acknowledge that person. But after spending more time in New York, I realized this naive Midwestern politeness was setting me up to be taken advantage of at every turn.

So I grew up a little bit, became more of an asshole, and ceased to pay any attention whatsoever to The Flier People. My ignore-and-keep-walking move is now ludicrous in its extremity. Yeah right I don't notice the leaflet vigorously flapping inches from my face. But the more vehement the shaking, the more determined I am to deny its existence. What, dear Native New Yorker, is the moral status of this strategy?

On the one hand, my mental and bodily space are being invaded—at times rather brazenly. The Flier Person inevitably stands as obnoxiously as possible, completely disrupting the flow of people attempting to move through the world on their own business. It's an environmental fail as well: I already know I don't want what they're pushing, and the idea of taking resources just to throw them away several yards later is repulsive.

On the other hand, I suspect I'm being a jerk. I totally get that it's a job. I'm sure The Flier People are infinitely more annoyed at having to do it than I am by their doing it. A friend (who always takes the flier) once told me that the sooner they've distributed the stack, the sooner The Flier People get to go home. Out of solidarity for my fellow laborer—forced to "choose" one exploitative job or another in order to earn the right to exist—I want to support getting it over with as quickly as possible. Most importantly, it seems that going through life deliberately denying the humanity of other people (regardless of how abrasive I may find them) is just no way to be.

I would love to hear your advice on this, Jake! I'm sure I'll be able to put in action within a block of the door.

Thank you for your very long and thoughtful letter. It is clear that you are kind-hearted New Yorker, with a genuine concern for both your fellow citizens and the environment in which we live, which is a rare combination. As you have already realized, this makes you what Flier People and their more nefarious cousins, Clipboard People, call "a mark", or, in less polite terms, when they gather at their street worker bars, "a sucker". This is very unfair, and just the sort of predatory attitude that has given their industry a bad name.

To all humans you owe a basic loving-kindness, which here in New York means not spitting on them, not physically injuring them as you dash for a subway seat, and not taking up more than one parking space. Beyond these basic niceties, reciprocity is the key to every relationship. This is the basic sin of the street workers: they ask for more than this basic consideration (by blocking your way, by taking up your time, by asking for money) but give zero back. You owe them nothing, and are well within your rights to do what most New Yorkers do: pretend that they do not exist.

Of course, as we've discussed in the past in regard to donating to the homeless, and giving directions to tourists, sometimes it acceptable to help a stranger out. This can be justified in many ways: the good karma you will receive, as a small pledge towards a friendlier city, on reflection that at some point the shoe may be on the other foot, etc. This sympathy should be parceled out carefully, avoiding obvious scammers and predators—but you can probably take a flier from the poor downtrodden flier guy who just wants to finish his stack and get home to see his kids without encouraging the widespread proliferation of more flier people on every corner. Who knows—maybe he even has a coupon for Pinkberry or something. 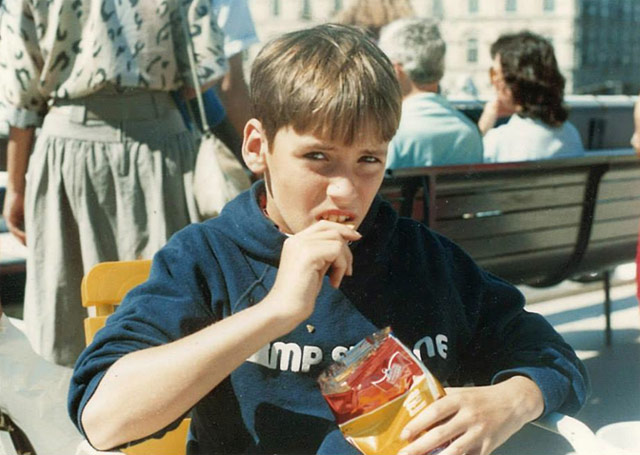 However, and this is very important, the Clipboard People must be ignored with EXTREME PREJUDICE. This is because Clipboard People are grifters, who, in the name of various causes (Gay Rights, the Environment), have only a single aim: to get your credit card number authorized for recurring payments to a "charity." In fact, the majority of that money does not go to the charity, but goes to pay the salary of the Clipboarder, and the evil canvas organizations that employ them. Even worse, the Clipboarders are themselves exploited—often young idealists from less vicious places, they are brought to New York on the promise of helping a charity they believe in, only to find out they've been dragooned into a commission-based predatory marketing scheme.

This scam is more evil than most because it is done in the name of legitimate charities, and targets the nicest, most generous people on the streets. The assholes amongst us are immune, of course, because they don't bother to even make eye contact, but sensitive, thoughtful liberals who just want to support your right to Gay Marriage or save a Polar Bear from drowning end up with a $30 monthly charge on their credit cards. On average, it takes about 8 months before they realize that they've been had, and that almost all of the money they've given hasn't even gone to the charity. Then they cancel and probably turn their back on the progressive movement, become neoconservatives, and move to the Upper East Side. It's a sad story, and it's all because of the Clipboard People.

Ultimately New York works because we all leave each other in peace. Our city's history of bloody riots every twenty years testifies to the deep reservoir of hostility that lurks just beneath the surface, ready to erupt at any time. Do not feel guilty about protecting your personal space from people trying to usurp and exploit it. Once we've lost the right to ignore each other, the streets will quickly run red with blood.

NB. At the same time, make sure you are not the aggressor in these situations. For instance, don't bring things to a painful point screaming "Hell, yeah, I support gay rights, motherfucker, you know what else I support? You getting the fuck out of my way."

NB 2. Giving recurring donations to support gay rights or the environment is a good thing! Just make sure you pick a highly rated group like The Human Rights Campaign or National Resources Defense Council, and give directly to them through their websites, which lowers their fundraising costs.

#ask a native new yorker
#clipboards
#fliers
#original
Do you know the scoop? Comment below or Send us a Tip