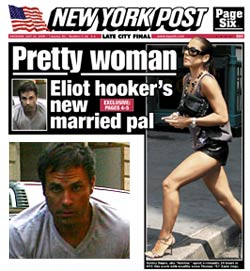 Ashley Alexandra Dupre, aka expensive escort "Kristen" who romped with former Governor Spitzer, was spotted at the Gramercy Park Hotel on Tuesday by photographers hoping for a glimpse of Lindsay Lohan and Samantha Ronson. Dupre was accompanied by Thomas "TJ" Earle, a NJ asphalt scion who lives 2 miles from Dupre in NJ...and who is very married. We guess she hasn't moved to LA yet.

The Post reports the two retreated to the hotel after a "long day drinking, dining, shopping and snuggling together in limos." And there's judgment about Dupre's clothing: "Earle quickly scooted off when he saw a photographer. He left behind Dupre, who casually strolled down Fifth Avenue, turning many heads with her revealing top and skirt, which seemed better suited to a night servicing a client than to a day shopping in Midtown." Hey, it was hot yesterday!

Earle refused to answer questions when he arrived back in NJ, but a neighbor told the Post Earle's wife (and the mother of their two children) is "prettier by leaps and bounds" than Dupre. In other news, Spitzer was "greeted by snickers and smirks" at the David Barton Gym on the UES.