As the Albany Brawl Turns 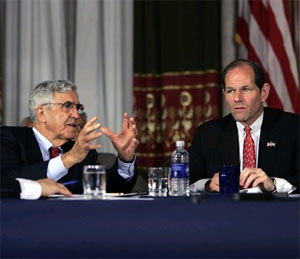 The Post takes out a fraction of its crowded cover (A-Rod's 30th home run gets top billing) to trumpet that Governor Eliot Spitzer's aides allegedly looked for dirt on Senate Majority Leader Joseph Bruno, in hopes of getting a NYC DA's office to investigate Bruno. Not only that, a source says Spitzer's office allegedly contacted an "investigative agency...about a possible probe of Bruno before the accusations of the misuse of state aircraft became public nine days ago - suggesting a conspiracy aimed at Bruno was already under way." That is some source!

Let's just sum up what's happened over the past week:

Spitzer told both the Daily News and NY Times that he never called Bruno an old piece of poo. He told the News, "I have been scrupulous in my comments over my entire tenure as governor not to personalize any of these issues. I made a number of calls to Republican senators, all affirmative calls, to say how can we move the ball forward. I have not been involved in the politics of personal attacks. It's not the right way to act as governor. It's not the right way for anyone to act." When the News asked for a comment, Bruno agreeded that everyone should govern, but didn't hesitate to add, "We did not start this whole thing - he did."

Then again, Assembly members don't think they'll head in for a summer session because things are so bad. For instance, Albany Democratic Senator Jack McEneny tells the Times Union, "I don't see how we could be productive in this poisoned atmosphere." Which means lots of issues that weren't resolved before the end of the regular session, including congestion pricing, might not be resolved.

Photograph of Bruno and Spitzer by Mike Groll/AP