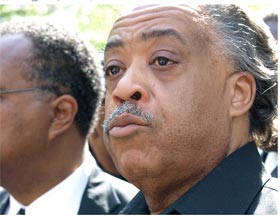 Last week, the Reverend Al Sharpton announced he hired a former U.S. Attorney as the feds continue to investigate his National Action Network's finances. The announcement comes on the heels of many of his corporate donors being subpoenaed.

Though rarely do I hear anything new I must say I find it interesting that the New York Post, which is owned by NewsCorp, would claim that National Action Network "shakes down" corporations for contributions because they have been supportive of National Action Network in the manner described above. Newscorp bought two tables to our 2005 Martin Luther King, Jr. Dinner so they could further lobby against our mutual questioning of the fairness of Nielsen Companies new rating system. They even hosted a member of Congress at their table knowing that my public statements at the dinner would support our mutual position. Clearly they understand when they want to work with NAN and me but have some jaded view of when others do. In fact I recommend that IRS talk to NewsCorp first.

You can read his full statement here.

Sharpton is also suspicious of the Justice Department, after he and his staff were given 6:30 a.m. "wake-up" subpoenas last December over their financials, and said that his new lawyer, former Brooklyn U.S. Attorney Zachary Carter, "knows the workings of that office and is totally aware of what is proper."

Today, as it happens, the Post reports how only two of the National Action Network's 36 chapters have filed as non-profits in the states they are in (some states only require registration if the organization raises over a certain amount, some require it no matter what).