As NYC Voter Registration Has Grown, Turnout Has Declined

As the population of New York City has grown over the past fifty years, so has the number of registered voters. Gothamist graphed registration and turnout data in New York City—going back to 1953 for mayoral elections, and back to the 1970s for gubernatorial and presidential elections—and found that despite the increase in registrations, voter turnout levels have been decreasing for decades, especially in mayoral and gubernatorial races. 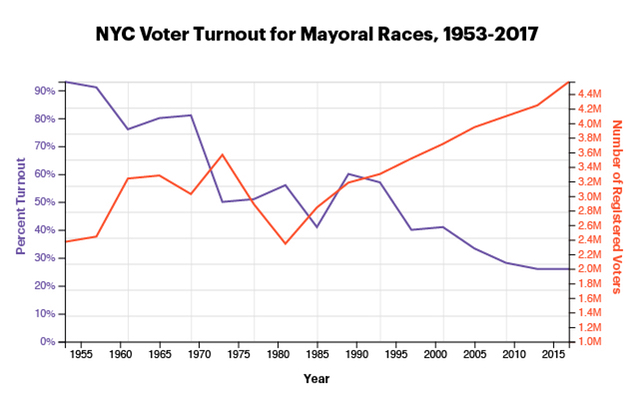 “This [trend] is somewhat similar to national trends, indicating a pervasive decline of trust in local and national political institutions,” said John Mollenkopf, a professor of political science and sociology at CUNY. 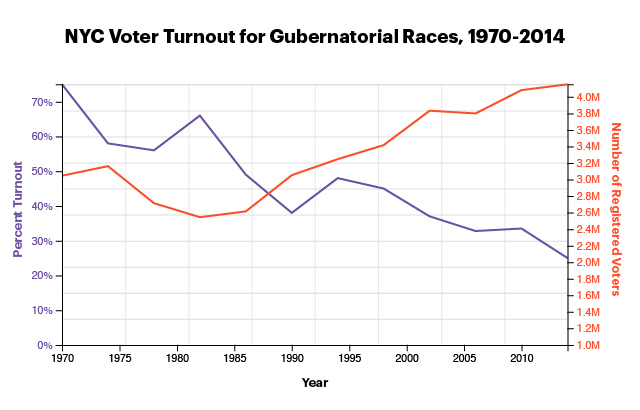 He offered several other explanations for our particularly abysmal turnout rate. One is the physical difficulty of voting in New York. Over the years, some states have adopted measures to make it easier to vote, including voting by mail well in advance of election day. But in New York, we don't do that. You have to show up in person on a Tuesday and sometimes wait on line. Mollenkopf said if New York modernized its voting system more voters would turn out.

“If somebody just filled out a little form at their kitchen table, stuck it in an envelope and mailed it off, that clearly takes less time and effort than going to a neighborhood school and waiting in line for 15 minutes,” he said. 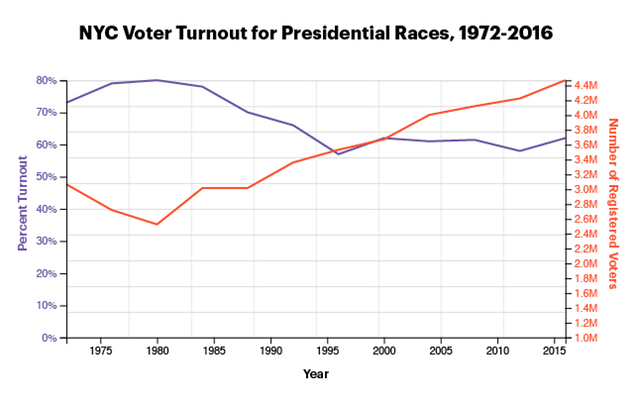 Mollenkopf also said that “get out the vote” efforts are largely driven by political campaigns that target voters who are registered with a party or turned out in recent elections. This strategy fails to reach large swaths of the public. Many immigrants, for example, do not initially pick a party when they register to vote. And incumbents are often wary of mobilizing voters they know little about.

That leaves competition as perhaps the best available option to increase turnout. The public is more likely to show up at the polls if they are invested in the candidates. This could explain why turnout in presidential races has been relatively high, while turnout in mayoral and gubernatorial races has plummeted.

“Having candidates that people are excited about and having real competition is important. In New York City elections over the last decade, for example, even though they were contested, they didn’t seem to illicit as much broad based enthusiasm as was true of the past.”