By
Brigid Bergin
and
WNYC Staff

By
Brigid Bergin
and
WNYC Staff

The New York City Board of Elections submitted an expanded list of sites for early voting to the state late Wednesday — just ahead of a deadline for municipalities seeking a portion of $24 million in state funds. Voters in these locations would be able to cast ballots nine days ahead of the general election in November.

Altogether, the NYC BOE sent the state a total of 57 locations, an increase of 19 sites from its preliminary list but still well shy of the 100 locations demanded by the de Blasio administration. New York City has roughly 5 million registered voters.

Earlier this year, the state approved a long-awaited series of election reforms that included early voting. Prior to that, New York had been one of only 12 states that did not offer early voting.

Under the latest proposal, Brooklyn picked up the largest number of new polling places for early voting, moving to 18 from 10. Queens saw the number of voting sites double to 14. And the Bronx received four more sites, bringing the total to 11.

The sites selected for Manhattan and Staten Island were the same as the previous list — seven locations in each borough. 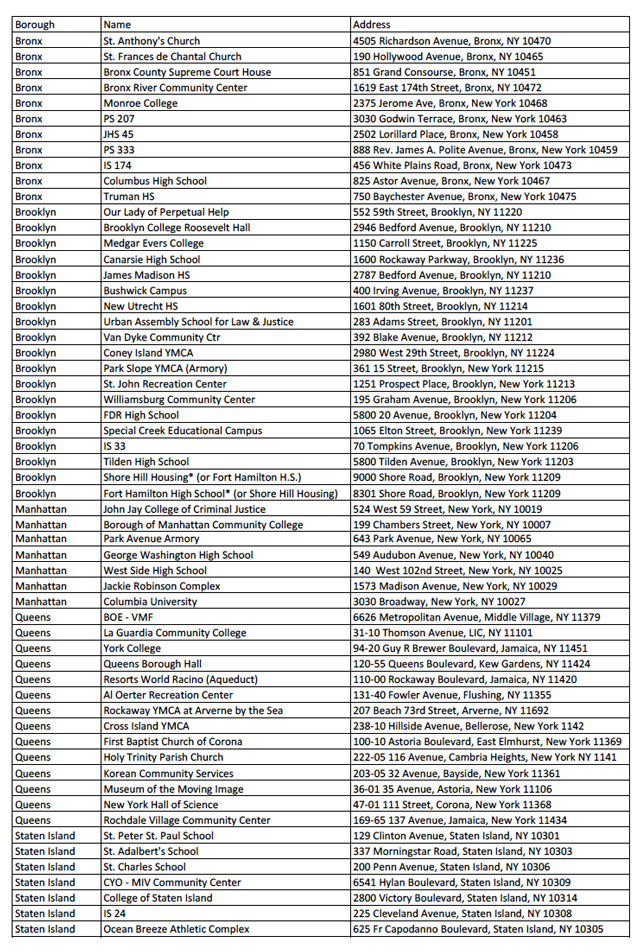 Each site is eligible for $15,000 in state reimbursement funds for the cost of early voting operations along with an additional $15,000 in capital funds per site to purchase an electronic poll book.

The NYC BOE’s current submission would result in a combined $1.7 million in state funds towards early voting.

Based on a Gothamist/WNYC analysis, there are still nine City Council districts without a single site for early voting. They include: central Harlem, Chelsea, Greenwich Village, and the Lower East Side in Manhattan; a portion of Flatbush in Brooklyn; Jackson Heights, Elmhurst and parts of Astoria in Queens; and Highbridge and parts of Morisannia in the Bronx.

Earlier this month, three advocacy groups, including the New York Civil Liberties Union, sent a letter to the NYC BOE criticizing the plan for early voting, saying it favors voters in predominately white and affluent neighborhoods.

“It would be less of a problem if people were able to vote at any early voting site of their borough of residence, but the board has steadfastly refused to do that so far, which is concerning,” Grossman said.

Earlier in the week, Mayor de Blasio, who offered the NYC BOE $75 million if they picked at least 100 sites, warned there would be consequences for a lackluster plan.

“We will consider all options possible to make them create an early voting program that actually works for everyday New Yorkers,” de Blasio said on Tuesday at an unrelated press event at City Hall, adding, “We'll certainly consider legal action among those potential steps.”

That same day, at the weekly meeting of the NYC BOE commissioners, half a dozen disability rights advocates showed up to ask them to consider their needs when devising their plan for early voting.

“People need to vote where they work, where they go to school, where they are,” said Jean Ryan, president of Disabled in Action. Addressing the commissioners on behalf of 10 disability rights groups, she said people with disabilities turned out at lower rates than any other demographic group.

The commissioners, however, argued that the current election technology combined with state testing requirements for all ballots and voting machines made such a request impossible to meet in the upcoming election — or any future ones.

“It’s not practical at this stage to be able to have essentially universal voting in each of the five boroughs,” an exasperated-sounding Fred Umane, the Republican commissioner from Manhattan, told Ryan. He added, “No offense to you, ma’am, but people keep asking about it, and we’ve said, at least for this October, November, it’s not in the cards.”

In an interview after Tuesday’s meeting, NYC BOE Executive Director Michael Ryan signaled the city would listen to feedback about its current list of sites, but he also urged voters to give the Board of Elections a chance to get this right.

“[Early voting] has never been done in a five-borough operation before,” said Ryan. “We’re working towards putting on the best product that we can put on in November.”

Brigid Bergin is an award-winning senior reporter on the People and Power desk. Fiercely committed to telling stories that help people engage and support democracy for more than a decade, her coverage has led to multiple appearances on NPR, MSNBC and the Black News Network. Brigid's reporting in 2017 included some of the first coverage of a political upstart now known as AOC. In April 2016, she broke the news of a voter purge in Brooklyn just days before New York’s presidential primary, triggering city, state and federal investigations. Brigid also guest hosts The Brian Lehrer Show and The Takeaway. She graduated from the University at Albany and the CUNY Newmark School of Journalism. Follow her on Twitter @brigidbergin

As Memphis officials prepare to release footage of Tyre Nichols’ death by police, demonstrations are expected around New York City and the county.