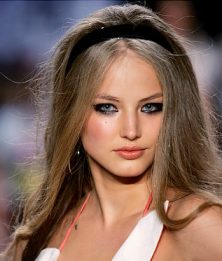 The medical examiner's office determined suicide as cause of death for Ruslana Korshunova, a 20-year-old model who fell from her Water Street apartment in lower Manhattan Saturday afternoon.

Friends gathered outside the building, crying and leaving flowers. Many reports noted that there was a hole in the construction netting outside her building; Newsday reported, the DOB couldn't "confirm whether the fall caused the hole and, if so, why the netting did not prevent her death." Her current boyfriend, Mark Kaminsky, says she had moved into his Staten Island home soon after they met in March, but she kept her Manhattan apartment.

The Daily News reported Kaminsky "last saw his girlfriend about noon on Saturday, about two hours before" she died. Kaminsky said she was "doing good" and "happy" with modeling. But her ex-boyfriend Artem Perchenok (who had seen Korshunova on Friday night) told the Post, "I think she just gave up" and said she was feeling the pressures of modeling.

She previously wrote about her sadness on a Russian social networking site, things like, "I'm so lost, will I ever find myself?" But Korshunova's mother, who lives in Alamty, Kazhakstan, was shocked, telling the Post, "She's had her ups and downs but never anything that would lead to suicide. This is completely unexpected."

#model
#Ruslana Korsunova
#suicide
#water street
Do you know the scoop? Comment below or Send us a Tip
A new Gothamist is coming! We’ve moved comments over to our beta site. Click here to join the conversation and get a preview of our new website.