In September, months after declaring the city's intention to divest its pension fund from fossil fuels and "sue Big Oil," Mayor Bill de Blasio published an op-ed in the Guardian touting New York City's effort to tackle climate change through sustainable financial policies. Alongside London Mayor Sadiq Khan, he announced the launch of a new global initiative, and encouraged local governments to "use our economic might to accelerate the transition to a low-carbon economy."

But nearly one year after the initial divestment pledge was made, the city is still doing business with the institutions directly responsible for the climate crisis. Rather than hastening the move toward green investment, big banks are ramping up their fossil fuel investments, while collecting billions of dollars in cash deposits from the New York City government. (As expected, the mayor's largely symbolic lawsuit was promptly tossed by a judge).

"We applaud the mayor [for divesting the pension fund], but we need to go further," Andy Morrison, Campaigns Director for the New Economy Project, told Gothamist. "The banks that are complicit in driving climate devastation are still benefiting from public money."

The details are laid bare in a report released Wednesday by a broad coalition of environmental and economic justice groups. In the last five years, New York City's "designated banks"—those deemed eligible to hold the city's cash—have committed over $100 billion toward fossil fuel extraction. Between 2016 and 2017, the largest banks increased financing to the "extreme fossil fuels," which include deep water fracking and tar sands mining, by 25 percent.

JPMorgan Chase holds the largest share of city deposits, with $855 million. Despite promising to limit its involvement with carbon-intensive projects, the bank increased fossil fuel financing by more than 50 percent last year—a "uniquely irresponsible" expansion, according to the Rainforest Action Network.

Both HSBC and TD Bank also saw double digit increases in their fossil fuel investments last year, while maintaining more than $300 million in combined city deposits. Citibank, which holds $425 million in city cash, increased their commitments as well, led by $522 million in financing for the Dakota Access Pipeline. 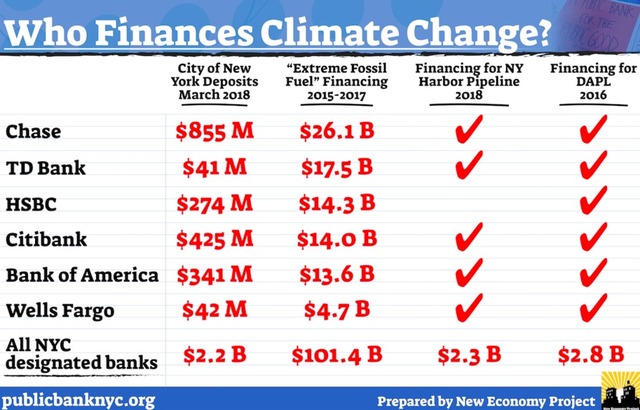 Courtesy of the New Economy Project

Whether a given financial institution is eligible to receive city deposits is decided by the NYC Banking Commission, a three-member body comprised of Mayor de Blasio, City Comptroller Scott Stringer, and Finance Commissioner Jacques Jiha. Though it's rare for the commission to strip a bank of its designation, it's not unprecedented. Last year, following Wells Fargo's account fraud scandal, the commission voted to withdraw its $227 million in deposits, and banned the bank from running municipal bonds sales for a year.

"We need to send a message to this bank and the broader industry that ethics matter," Stringer said at the time. Asked whether the same message should be applied to banks contributing to climate change, a spokesperson for Stringer's office declined to comment.

De Blasio spokesman Seth Stein told Gothamist: "Our city is leading the way in divestment from fossil fuels. We look forward to more institutions, investors, and municipalities following our lead." But he did not directly address whether the commission would consider reevaluating its relationship with certain banks.

Of course, the effort to cut off climate-wrecking financial institutions is somewhat complicated by the fact that just about every major bank in New York City is complicit in fossil fuel financing. The solution, environmental advocates say, is a municipal public bank. The idea has existed in North Dakota for nearly a century, and is picking up steam among left-wing politicians in Los Angeles, Oakland, and New Jersey. In New York City, a handful of elected officials, including City Councilmember Mark Levine, have thrown their support behind the plan.

"Our City should put its own money to work for New Yorkers through a public bank, which would supercharge investments in critical projects throughout the five boroughs, and return financial power to the people and businesses that need it most," Levine said Wednesday.

Coinciding with the release of the report, Public Bank NYC—a broad coalition that includes the New Economy Project, NY Communities for Change, and NY Public Interest Research Group—gathered outside City Hall on Wednesday to vocalize their ambition. The goal would be to divert public money from corporate banks into a publicly-owned financial institution, which could help fund the needs of local communities.

"Just imagine if there was a institution that had baked into its mission statement the goal of helping grow worker cooperatives, of expanding access to financial services, and of increasing affordable housing," Morrison told Gothamist. "We want to divest that money from Wall Street and redirect it to critical community needs. The money is there, it's about generating will."