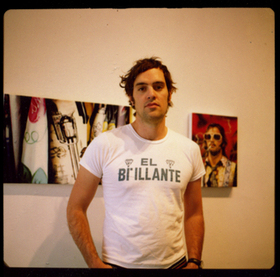 Late last month, after the death of his girlfriend Theresa Duncan, witnesses saw Jeremy Blake walk in to the water around Beach 102nd Street. The 35-year old East Village artist left a suicide note (along with clothes and a wallet) under the boardwalk at Rockaway Beach. His body was found on July 22nd off of Sea Girt, NJ, five days after he was last seen. Yesterday the body was identified as Blake's.

Police spokesman Paul J. Browne says the cause of death was presumed to be suicide. Duncan had also committed suicide just one week before, on July 10th - something Blake referenced in his final letter. While some are calling this a modern day Romeo and Juliet story, others are saying there is more to be unearthed, namely that the couple was adamant in their belief they were being stalked by Scientologists. This may sound "out there" until you read some of Duncan's blog entries documenting their encounters.

Blake asked Glenn O'Brien to write a final post on his girlfriend's blog after her death, which has now been published. Meanwhile, a new work in progress by Blake and Malcolm McLaren called “Glitterbest” was to be shown at an exhibit of his work at the Corcoran Gallery of Art in Washington this fall. As of now, the older pieces will still be shown and it's unclear what will happen to the new collaborative piece.