Artist and rabble rouser Robert Lederman sent us word that he was arrested this past Saturday afternoon on the 14th Street section of the High Line. He was issued 5 summonses, handcuffed and taken to the Precinct by Park Enforcement Patrol officers, after High Line staff called the NYPD.

Lederman, who was selling his art around 3:30 p.m., tells us he has won 5 Federal lawsuits on street artists’ First Amendment rights. "Among them was a 2001 Federal Appeals court ruling (Lederman et al v Giuliani), which established that visual artists can sell in any NYC park without a license or Parks permit, based on First Amendment freedom of speech."

The weekend summonses issued to him were for: Vending without a Park permit; failure to comply; disorderly conduct; failure to comply with directions of officers and unauthorized
vending. Lederman says, “The Parks Department has done a very poor job of educating their employees about the legal issues involving First Amendment rights, artists and parks. The wealthy people who paid to create the High Line seem to have forgotten that it is still a public park."

We've reached out to the High Line, the Parks Enforcement Commissioner, and Parks Commissioner Adrian Benepe for comments; in the meantime, after the jump you'll find a Parks Dept memo to PEP officers on how to handle street artists in public parks (from the looks of his set-up, it doesn't comply with the PEP tip sheet on how artists should display their work).

UPDATE: In response to our questions about the incident, the Parks Department simply tells us, "The High Line is a unique public space, a thin elevated corridor at less than three acres with pathways as narrow as eight feet wide in some places. Many activities are prohibited. These include biking, skateboarding, throwing a baseball or a Frisbee, or walking a dog. The High Line can receive as many as 25,000 visitors on a busy day, walking along its long linear surface surrounded by fragile new plantings. Mr. Lederman and other vendors are able to ply their trade in hundreds of New York City parks and on hundreds of miles of city streets, where visitors can linger and enjoy their wares." 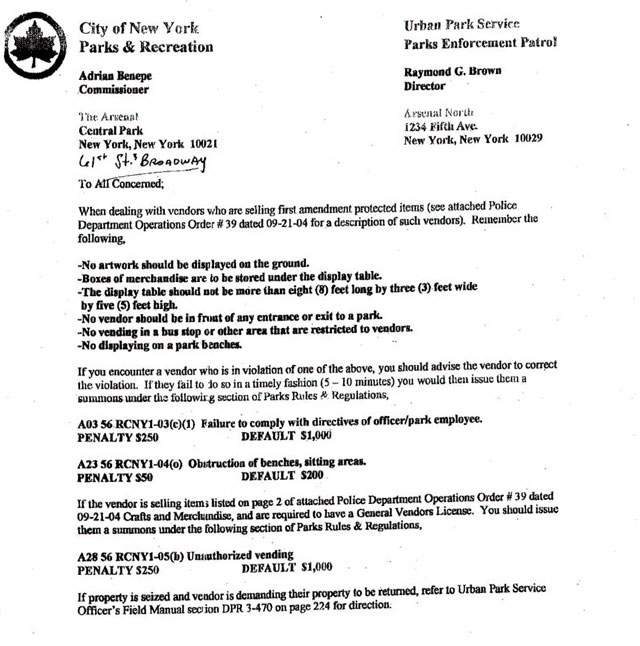