Yesterday, the FBI arrested State Senator Malcolm Smith and City Councilman Dan Halloran for their part in allegedly taking bribes to put Smith on the Republican mayoral ticket. Other members of the NYC Republican party were arrested—Vincent Tabone of Queens and Joseph (Jay) Savino of the Bronx—as well as two Rockland County Democrats (for a different corruption sting) leading U.S. Attorney Preet Bharara to declare that there is "a show-me-the-money culture seems to pervade every level of New York government."

An undercover FBI agent and a cooperating witness posed as developers who wanted to get their projects up and running. As the NY Times explains it, "The complaint described envelopes of cash trading hands in Manhattan hotel rooms and restaurants, payments of thousands of dollars to persuade Republican leaders in New York to put Senator Smith, from Queens, on the Republican ballot in November. The bribes were to be paid to obtain certificates authorizing him to run for mayor as a Republican even though he was a registered Democrat."

Smith's name was mentioned as a possible Republican contender last summer—he had been deposed from his leadership position by his fellow Democrats and then sided with a group of independent Democrats in the Senate to give Republicans power. Still, it was weird. According to the Daily News, "[Smith and Halloran] allegedly arranged to get envelopes of cash into the hands of GOP officials in the Bronx and Queens — though neither publicly endorsed Smith. In return, Smith agreed to use his office to obtain as much as $500,000 in state funding to benefit a real estate project supposedly being developed by the man who paid the bribes, the feds said. But that 'developer' was an undercover FBI agent."

Halloran, who represents Queens, was heard telling a cooperating witness, "That's politics, that's politics, it's all about how much. Not about whether or will, it's about how much and that's our politicians in New York, they're all like that all like that. And they get like that because of the drive that the money does for everything else. You can't do anything without the fucking money." Smith was heard saying, "Let's close the deal. I mean, I'm just saying, I wouldn't do anything with them until you close the deal. I would close it first." 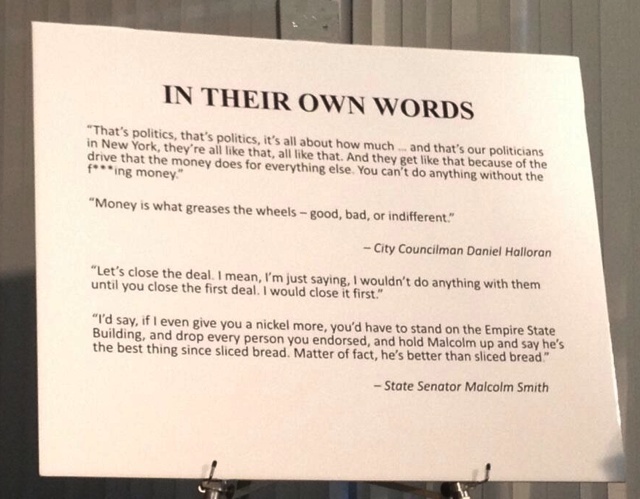 Some more details, via the News:

In a Jan. 25 meeting in Smith’s car in Rockland County, the cooperating witness told Smith that buying the help of Republican leaders would cost “a pretty penny” and asked if it’s “worth any price.”

Smith allegedly responded, “Look, talk to me before you close it. But it’s worth it. Because you know how big a deal it is.” On Feb. 10, Smith met with the undercover agent and the cooperating witness and discussed how to structure the payments to Savino and Tabone, the complaint says. “I wouldn’t give them more than, like, 10,” Smith suggested. “Just to start out.”

Savino allegedly took $15,000 in bribes while Tabone is accused of taking $25,000. Tabone has ties to the actual Republican candidates for mayor: He was on payroll of Gristedes' billionaire John Catsimatidis as a counsel and had been working on his campaign. Catsimatidis fired him and pointed out that Tabone worked in the Giuliani administration—which is where Joe Lhota worked.

Smith's lawyer, Gerald Shargel, said, "The allegations in this complaint do not tell the full story. I think there is much more to this story. I ask anyone reading about this to withhold judgment. We intend to enter a plea of not guilty if and when an indictment is returned." Still, Smith was stripped of his leadership positions in Albany.

Halloran's lawyer said, "The councilman denies all allegations and looks forward to clearing his name and coming back to court." Halloran's fall has become political opportunity for opponents of City Council Speaker Christine Quinn, with Bill Thompson claiming that the Council's discretionary spending is "broken system that, despite claims to the contrary, has clearly not been adequately reformed under the speaker’s leadership."

The allegations against Smith, Halloran, Savino and Tabone emerged from a slightly different corruption probe: The FBI had been looking at Spring Valley mayor Noramie Jasmin and her backhanded ideas for development in Rockland County. As Jasmin was allegedly trying to get the FBI's undercover agent and cooperating witness to "partner" with her, the feds allege that Smith agreed to help them with Spring Valley development in exchange for payoffs to the Bronx and Queens Republican party chairs.

The Daily News' Juan Gonzalez is shocked by the charges, " New York has produced some of the most crooked politicians in the nation’s history. This was, after all, the city of Boss Tweed, Jimmy Walker, Mario Biaggi and Meade Esposito. But this latest political scandal has to be the dumbest, most delusional scheme ever concocted... Did they imagine they could simply fix political races by passing tens of thousands of dollars in unmarked envelopes in shadowy meetings?"

#Albany
#corruption
#Dan Halloran
#Election 2013
#fucking money
#Malcolm Smith
Do you know the scoop? Comment below or Send us a Tip