Arrests Not Final, As 2nd Suspect Bolts Out Window 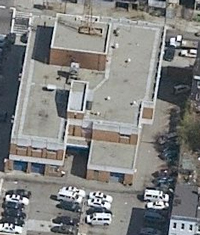 The NYPD may want to consider relocating its interrogation rooms to higher floors in its precinct houses, after the second man in 24 hours escaped from police custody by jumping out of an open window in his interrogation room Friday. Seventeen-year-old Ezekiel Edwards was the second suspect in a day to elude cops post-arrest, by waiting to be left alone in an interrogation room and then fleeing out a window of the 77th Precinct in Crown Heights, Brooklyn to an adjacent roof.

Edwards was arrested on suspicion of burglary and believed to be still handcuffed at the time of his escape. The NY Times writes that Edwards "either picked the lock of his handcuffs or squeezed his hand out" while detectives were typing up his arrest papers. The Post, however, lays the blame on the cops for mistakenly believing that Edwards was younger than his 17 years, because younger suspects are not confined as strictly: "They cuffed one of the teen's hands to a metal pole in a first-floor juvenile detention room, which is reserved for offenders aged 16 and under. Because of his age, he should have been locked into a cell, police sources said."

Less than a day before, Maxie Dacosta Jr. jumped out of a third story window at the 103rd precinct house in Queens to the roof of an adjacent building. Dacosta Jr. was being questioned in a murder investigation when detectives left the uncuffed man alone so they could confer outside of the interrogation room. The detective in that case has been suspended. Dacosta Jr. leaped from the third story window to the roof of the building next door, across an eight-foot-wide alley.

A police spokesman told the Times that it was an "unfortunate coincidence" that a second prisoner escaped.

(Image of the 77th Precinct from Maps.live.com)

#brooklyn
#crime
#Crown Heights
#heights
#Jr.
#maps
#murder
#ny times
#nypd
#police
#queens
#The NYPD
#the post
Do you know the scoop? Comment below or Send us a Tip