Arrests After 3-Year-Old is Forgotten on School Bus 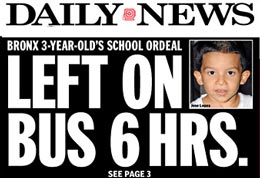 Yesterday afternoon, a mother picking up her son from P.S. 168 in the Bronx was told her son never arrived, leading to the discovery that 3-year-old Jose Gabriel Lopez had been abandoned on his school bus since the morning. Police found the autistic boy, "dehydrated, sweaty and hungry," in a bus parked nearby, according to the Daily News.

The boy's mother, Marisol Tirado, said, "I went to school to pick him up and a school official told me he was absent for the day. I went into a panic, crying, 'Where's my son?'" Even after he was found, she said, "I still don't know what happened. It's just horrible." Little Jose was taken to Jacobi Hospital and was found to be fine.

The bus's driver, Terry Rocker, and matron, Charlene Powell, were arrested and charged with reckless endangerment, child endangerment and endangering the welfare of an incompetent person. Rocker reportedly apologized to Tirado for leaving her son on the bus. And the boy's father, Jose Sr., told the Post, "Thank God I didn't see the driver. My reaction would have been bad."