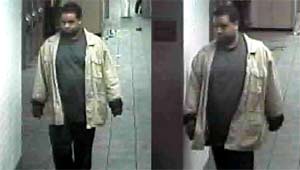 After showing surveillance images of a man who allegedly sexually attacked a woman for hours before robbing her, police have made an arrest. Emerson Deno, 32, was charged with rape, criminal sex act, burglary, robbery and unlawful imprisonment.

Deno followed the victim from the West 191st subway station to her apartment near West 190th Street and St. Nicholas Avenue around 5 p.m. last Friday. When she got to her apartment and started to unlock her door, he forced his way in.

The Daily News reports, "After she convinced him not to rape her, Deno forced the woman to perform oral sex on him for hours... He left about 4 a.m. Saturday with the victim's laptop." Deno has a prior arrest history, but not for sex crimes.

#attack
#force-in
#robbery
#sexual assault
#Washington Heights
Do you know the scoop? Comment below or Send us a Tip