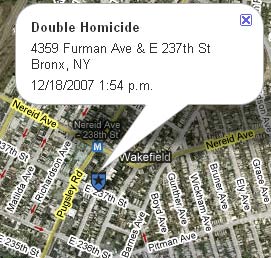 After friends and family became worried that 25-year-old Yolande Beckford and her 6-year-old daughter Monique did not arrive at work or school, the police went to their home and found their bodies yesterday morning. The two were stabbed to death, and there were no signs of forced entry. This morning, WNBC reports that the police have arrested Beckford's boyfriend for the murder, while Newsday reports that a relative confessed to the crime.

The Daily News spoke to Beckford's mother, who said she worried that her daughter and granddaughter died from carbon monoxide poisoning, so she called the police on Monday and called on Tuesday after Monique's school called to inquire about her absence. The News adds, "It was unclear if cops went to the home on Monday."

A friend, Simsky Harrison who also lives in the building and last saw Beckford on Sunday, added that she and others became concerned when they saw an open window from Beckford's apartment, because, as she said to the Post, "That was strange. We know she doesn't like the cold." Another neighbor lamented that Beckford was "a very good mother. She loved that little girl with a passion. "

The police had apparently been questioning two former boyfriends of Beckford's. WNBC's report said police arrested Camor Harding, 20, for two counts of murder and criminal possession of a weapon. Newsday says a relative "told police he stabbed them with a knife, then spent Tuesday with the rest of her mourning family."