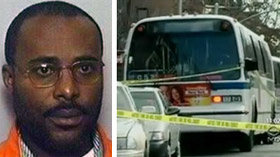 Yesterday, police arrested a 20-year-old man
for fatally stabbing a bus driver aboard a B46 bus in Brooklyn on Monday afternoon. Horace Moore reportedly confessed to police "that he stabbed the driver, Edwin Thomas, 46... after an argument on the bus." (Thomas is pictured at left.)

The police now give a somewhat different narrative of what happened: The NY Times says Moore "sneaked onto the bus through a rear door about 12:30 p.m. and sat down without paying" and when "the suspect asked Mr. Thomas for a transfer on Malcolm X Boulevard at Gates Avenue in Bedford-Stuyvesant, Mr. Thomas gave it to him, but the two men argued."

The Daily News explains, "Thomas stepped outside with the miscreant passenger. The driver finally provided a transfer, but Moore responded to the goodwill gesture with a punch to Thomas' head. Moore chased Thomas back into the bus, pushing his way inside as the driver tried to close the doors, and then stabbed Thomas in the chest, authorities said." Moore, a drug dealer, apparently confessed to one of his clients, who tipped off the police.

Moore is described as an ex-con and the Post details, "his criminal record includes a subway weapons-possession rap in Brooklyn last July, a disorderly conduct charge for beating a subway fare and a charge of endangering the welfare of a child for sexual misconduct with a 13-year-old girl."

Thomas' fellow bus drivers mourned his loss and told the NY Times their jobs are dangerous. One said of farebeaters, "We’re up here like sitting ducks at the mercy of these people." And the NYC Transit Bus Operator's Guide says, "The key to your reaction to fare evasion is your tone. In the tradition of Mahatma Gandhi and Martin Luther King Jr., you need to put up some passive resistance.”