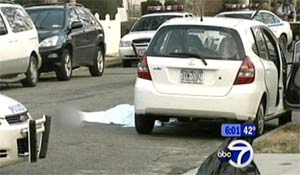 Yesterday, a woman was found shot to death, clutching a knife in her hands. It turns out that 23-year-old Shauna Sanders was killed on Jordan Avenue in St. Albans after fighting with a date about her cell phone.

According to the Daily News, Sanders and her cousin met two men at a bar and went home with them Friday night. On Saturday morning around 6:30AM, apparently Sanders and her date, Donnell Dunson, got into an argument over Sanders' cell phone (she believed he stole it). When Dunson left the home, Sanders followed him out, waving a kitchen knife. A witness said she was screaming, "She was yelling about the death of her baby."

Another person in the group tried to intervene; a neighbor told the NY Times the man told Dunson, "The guy walked up and said, ‘What are you doing?’. He said, ‘Don’t bring your problems here.’” Realizing Dunson had a gun, the man urged Sanders to leave. But Sanders didn't and stabbed the car with the knife. Then Dunson fired a gun, hitting Sanders.

Dunson got out of the car and fled in a black Acura. Sanders tried to follow Dunson, but her cousin stopped her and called for help; Sanders died on the sidewalk shortly before 7AM. Dunson was apprehended last night and arrested for second-degree murder and criminal possession of a weapon.