Are Uber Drivers Faking Vomit In Their Cars To Collect Hundreds Of Dollars?

A frequent user of the ride-share service Uber is swearing off the company after she says her driver accused her of vomiting in his car to stick her with a $200 cleaning fee, and backed it up with faked photos of the alleged barf.

Meredith Mandel, who works as an art director in Manhattan, says she left a late dinner at the restaurant Roman's in Fort Greene early on the morning of February 21st, accompanied by her boyfriend and a friend, and caught an Uber back to their respective apartments in Williamsburg. She said that the trip ended shortly before 1:30 a.m., no muss, no fuss, but that she awoke in the morning to see a $200 cleaning charge tacked onto her $19 fare in her Paypal account, without any explanation. 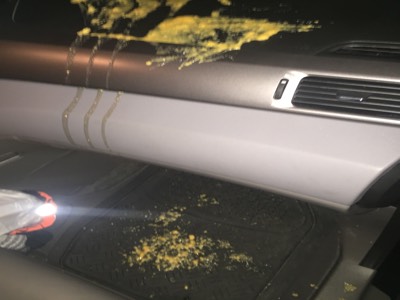 Gross, but is it real? (Meredith Mandel)

After some back-and-forth with customer service, reps began telling her variations of "the driver let us know that there was a mess on the trip resulting in the need for a car cleaning." One agent said that the driver, a man named Muhammad, recalled her party being drunk. One of the emails also notes that "the cleaning fee goes 100% to your driver," and includes the allegedly staged vomit crime scene.

Upon receiving those, Mandel went into detective mode.

"I was infuriated, because I realized that it actually is a scam," she said. "At first I was trying to actually give them the benefit of a doubt, but I realized [it] because all of the money goes to the drivers."

She determined a few things of note. One: at least one of the three photos appear to show portions of the car in the front seat. She says that she and her fellow passengers were confined to the back. Two: all of the purported puke seems to be confined to easily washed plastic surfaces, mainly floor mats and the plastic of the dashboard and a driver's-side door. Three: there have been other reported instances of alleged Uber vomit scams, including two incidents in Tampa, Florida that got a driver fired, and another in Los Angeles. Four: when she uploaded the photos to a metadata scraping website, no time or date was attached to the photos (we repeated this process with files she provided and got the same results). And of course, she says neither she nor her companions were drunk.

Oh, and that yellowish goop from the photos? Mandel said the glove doesn't fit on that one either.

"The vomit is super yellow, and we ate really dark food, like meat," she said. "It just doesn't line up." 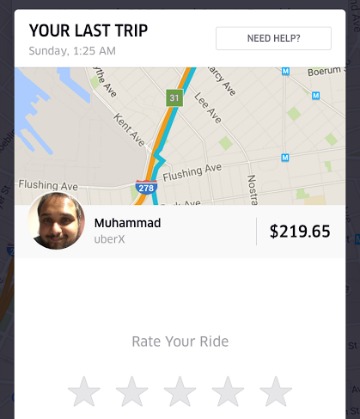 What in the... (Meredith Mandel)

Mandel disabled her Paypal account at first, but then realized that for a refund to go through, it would have to be active. When she turned it back on, she said, there was another unexplained $200 charge from Uber pending. She said that an attempt to call Muhammad ended up connecting her to "a random guy named Harris."

After a few more frustrating days, she laid off Uber customer service and filed a complaint with the Better Business Bureau. She checked back in with Uber yesterday and in the evening, before Gothamist reached out to Uber, a customer service guy named Jose wrote to say, "I'm sorry to hear about you were charged more than you expected for this trip." He said she would be refunded her $200 within 1-3 days. Jose also pledged to follow up with the driver and "make sure to take appropriate actions."

Mandel said she used Uber "all the time," but has sworn off it since the incident, "which is super unfortunate, but it's because I just don't feel comfortable anymore." She said she has downloaded the NYC Taxi app and Lyft to fill the void. The second $200 charge didn't go through and has since disappeared, she said.

We reached out to Uber's corporate office to see what those "appropriate actions" might be, how widespread the problem is, and how the company's protocol for proving cleanings works. Spokesman Matt Wing sent this statement:

Uber's website says that the cleaning fee does indeed go to the driver, and says that the fees are "always" accompanied by an "an updated receipt with an explanation," which Mandel says she didn't receive. A customer service rep named Patrick told her Uber "does not have to warn passengers about a cleaning charge."

Repeated fare cuts dating back to 2014 have prompted some New York Uber drivers to stage strikes, work slowdowns, and protests in recent months.

An Uber driver we spoke to, who asked to remain anonymous, said that passengers ralphing is a real problem, especially early in the morning, and that he tries to steer clear of fares who he finds falling over as they sit on the curb.

"When I see somebody too drunk, I ask them, 'Are you sure you're okay to ride? You're not going to vomit in the car?'" he explained. "Ten, fifteen minutes later, they puke all over the car."

Such an event can take a driver out of commission for hours as he or she searches for a 24-hour car wash and tries to shampoo out the nastiness, costing lost revenue on top of the cleaning bill. It is theoretically possible to collect money for phantom throw-up, though. The driver explained that Uber first asks for photos and bills the customer an amount its bean-counters deem appropriate. A receipt for the cleaning is only required if a driver asks to be reimbursed in addition to the initial amount. Uber does not reimburse for lost time, he said.

The driver said he hadn't heard of any puke-faking Uber grifters, and that it seems like a lot of trouble to go to.

"I don’t see why somebody would go out of their way just too get a hundred, a hundred fifty dollars, when you could make that in two or three hours of working," he said.

Still, he said, it's possible.

"I wouldn’t be surprised if some Uber drivers used that as a scam," he said. "We’re human beings, and unfortunately, human beings are capable of anything. But all that to collect a hundred, two hundred dollar cleaning fee? That's a new low."

Taxi and Limousine Commission Deputy Commissioner Allan Fromberg reached out with these words of wisdom:

...when a Dispatch Service Provider such as Uber says "We’ll take the appropriate action," the most they can possibly do is suspend or remove them from their platform, leaving them with a valid TLC license, which would allow them to simply move on to another For-Hire base. It’s for this reason we passed rules last year that require these services, and actually all For-Hire bases throughout the city, to affirmatively notify their customers that the appropriate place for complaints (or compliments, for that matter!) is 311/311 Online. Only the TLC has the authority to suspend or revoke a taxi or For-Hire Vehicle (livery, black car or limo) driver! While it’s perfectly fine to report problems directly to the service provider, we want to ensure that cases of egregious behavior - or simply inappropriate behavior -- are handled truly appropriately! Thanks!