Are Thousands Of Ritually Slaughtered Chickens Being Turned Into... Biodiesel?

Most Hasidic Jews I've spoken to in Brooklyn about kapparot, the annual pre-Yom Kippur chicken slaughter ritual, say the same thing about what happens to the meat: it goes to charity. Given the challenges of safely storing and transporting chicken carcasses for human consumption (and the rigorous requirements of the federal Poultry Products Inspection Acts), it seems safe to say that if you don't see some large refrigeration equipment at a kaporos event, the meat is probably not edible, or shouldn't be eaten. Indeed, at this year's large-scale events Monday evening on President Street at Kingston Avenue and on the Eastern Parkway service road, no refrigeration was apparent. Helpers for the ritual slaughterers could be seen tossing the birds, covered in blood and often dusted with feces from their time in stacked crates, into trash bags and cans after their throats were slit.

The following morning, an animal rights activist recorded this video that seems to show workers throwing out chicken bodies from both sites. The activist counted over 23 full trash cans emptied.

What's especially interesting about the video, is that at the Eastern Parkway site a worker with a shirt from a company called Dar Pro explains that the chickens are "going to a rendering company. They make ethanol out of it. They make oil out of it. It's a big process. 10 percent ethanol, that's corn and everything else."

This abbreviated explanation doesn't make total sense: ethanol is an alcohol made from the sugars in grains such as corn, sugar beets, and sugar cane, and a gasoline additive. Flex-fuel vehicles run on fuel that is 85 percent ethanol and 15 percent gas. Animal material can't be turned into ethanol, but what it can be used for, along with ethanol, is making biodiesel, which can be used as a cleaning diesel additive or, for specially set up engines, a fuel by itself.

First, though, the discarded animal pieces need to be rendered, a process of grinding them up and cooking them at high temperatures until the fat separates. The nonfat powder created by this is a high-protein substance called meat and bone meal, which is commonly incorporated into pet food and livestock feed, among other things.

It so happens that the services offered by Dar Pro, a subsidiary of the Texas company Darling Ingredients, include "full-service management and recycling of your inedible meat by-products." The company runs a biodiesel refinery in Butler, Kentucky, jointly operates another in Norco, Louisiana with petro-giant Valero, and supplies a third in Montreal.

Rina Deych, a leader of the anti-kaporos group Alliance to End Chickens as Kaporos, said that in her two decades or so of advocating to end the slaughter, she has only observed a few operations that seem to be processing the meat for people to eat. The rest of the carcasses, she said, go in the trash. She was skeptical of the explanation that the Eastern Parkway chickens are going to be made into some kind of consumer good.

"If it’s true, then they’re not totally going to waste, but that’s a hell of a way to obtain that kind of product," she said. "You can get [biodiesel] from vegetable matter, if that’s in fact what's being done here." 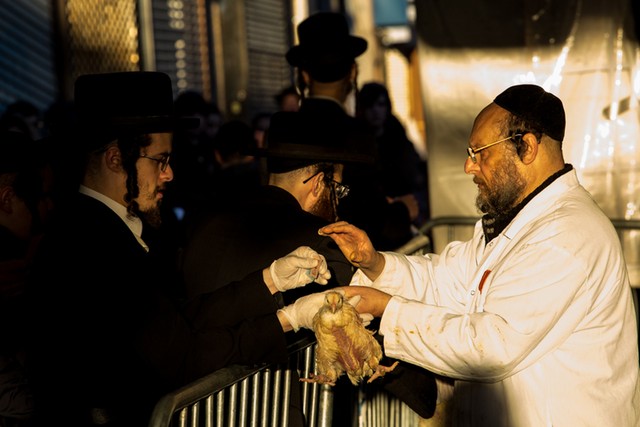 A worker hands a chicken to a kaporos practitioner at Cohn Live Poulrty in Williamsburg, where tickets ran $17 per chicken, and the slaughterhouse provided the butchering. (Scott Heins/Gothamist)

Regarding where the slaughtered chickens are supposed to end up, the website of Crown Heights's dominant Hasidic group Chabad allows ritual organizers some wiggle room about whether or not one must give the chickens, stating, "[the chicken's] monetary worth [is] given to the poor, or, as is more popular today, the chicken itself is donated to a charitable cause." The National Committee for the Furtherance of Jewish Education [NCFJE], a Chabad group led by the Hecht family, considered to have popularized the practice in the U.S. over the last four decades, has a more stringent prescription on its website. The site states, "The value of the fowl is given to the poor, and its meat eaten in the Yom Kippur meal; some give the fowl itself to the poor. "

Shmarya Rosenberg, a former follower of Chabad and former author of the muckraking blog Failed Messiah, said that he has not heard of the bird-to-biodiesel pipeline, but that's beside the point.

"They shouldn’t be doing that with the carcasses to begin with," he said. "If you’re going to kill them, you should eat them." 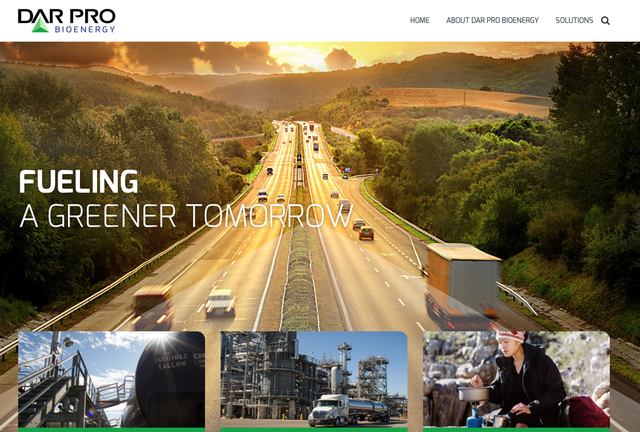 NCFJE chairman Rabbi Shea Hecht has indicated that the group keeps the money generated from the chickens, which can run from $5 to nearly $30. There is no registered charity by the name National Committee for the Furtherance of Jewish Education, but the group operates Chabad centers, camps, toy drives, and seminaries around New York, according to its website. Speaking to The Jewish Star, Hecht said that the money raised by NCFJE's kaporos events goes to NCFJE, and that it's the organization's second-largest annual fundraiser. In other words, the money doesn't seem to go "to the poor," except through NCFJE's already-in-place programming.

We didn't catch what price chickens were going for at NCFJE's two locations this year, but at the President Street event, operated by Eshel Hachnosas Orchim, which provides housing for visiting Hasidic Jews, they were $12 each. A five-week-old boiler chicken, which are generally what kaporos centers use, weighs about five pounds on average, and according to the National Chicken Council, the wholesale price for a live chicken is 53 cents per pound, meaning the average chicken runs about $2.50, plus transportation. Considering that some 50,000 chickens are slaughtered around New York during the days that kapparot is practiced, thousands at the Hechts' ceremonies alone, these are pretty hefty profit margins.

In The Jewish Star, Shea Hecht complained about competition from upstart kapparot organizers, saying, "A lot of places cut us out. We used to do it in Flatbush. We don’t do it in Far Rockaway anymore. It’s private business now…Hey it’s capitalism. God bless this country." 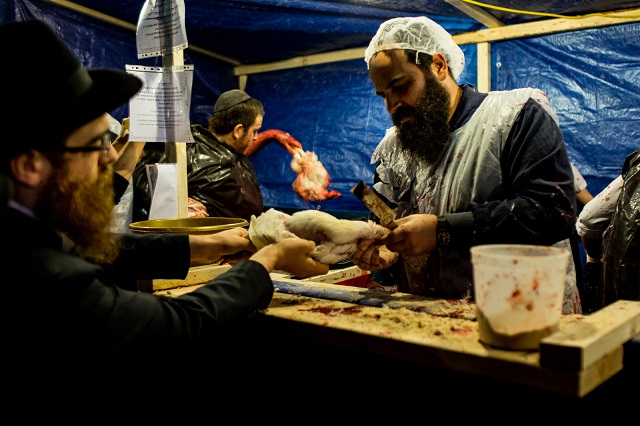 A shochet, or ritual slaughterer, works late into the night slaughtering chickens the night before Yom Kippur in Crown Heights. (Scott Heins/Gothamist)

Hecht's group doesn't seem to be the only one counting on kaporos for funds. In a lawsuit seeking to allow the ritual in the Detroit suburb of Farmington Hills, the Congregation Bais Chabad of Farmington Hills argued that the ritual must be allowed to proceed in part because it is "financially, the single most important event" for the organization.

At Cohn Live Poultry, a slaughterhouse in the Satmar Hasidic neighborhood of Williamsburg, the chickens were stored under a tent on the street, in crates packed a dozen high. Kapparot practitioners bought the chickens for $17 each, taking the chickens by hand or in boxes to perform the attendant prayer and waving of the chicken over one's head three times, then lining up to bring the chickens inside for slaughter. Parked at curbside was a rented Penske refrigerator truck, but owner Mates Cohn said that much of the meat is taken home for customers to eat at Yom Kippur. Some people opt to leave their meat, which he said he stores in the truck to give away to needy people who know to come ask for it.

It's not clear if NCFJE gets paid for the carcasses it had hauled away—Dar Pro has not responded to a request for comment and NCFJE and Eshel Hachnosas Orchim can't be reached because today is Yom Kippur, although they have not responded to Gothamist in the past, either. If the carcasses are in fact being sold to be turned into fuel, it would represent an additional revenue stream for an already-lucrative operation. 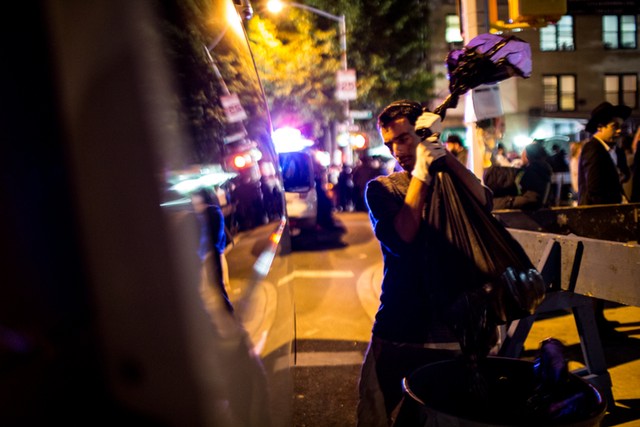 A worker loads a trash bag filled with chicken carcasses into a van on Kingston Avenue. (Scott Heins/Gothamist

In the mid-late 2000s, Hecht served on the legal defense committee for disgraced kosher-meat tycoon Sholom Rubashkin, who is serving a 27-year prison sentence for his role in a bank-fraud scheme involving his Iowa kosher meat plant Agriprocessors, site of one of the largest immigration raids in U.S. history. Agriprocessors was also the subject of a PETA investigation that showed cows' throats being ripped out while they were still alive.

Hecht and others have come under fire from animal-rights protesters who allege that the way the kaporos birds are stored, outside in stacked crates for extended periods, sometimes without food or water, is unnecessarily cruel, and that the slaughter violates a litany of health and sanitation laws. Over the past few years on the Sunday night before Yom Kippur, protesters on Eastern Parkway at Kingston are greeted with the sight of chickens stacked in crates in the street (which is blocked off, though the event lacks a permit). This year, NCFJE seems to have adjusted its preparation method by not having the chickens delivered there until Monday. Also, on President Street on Monday, workers loaded some of the trash bags full of chicken carcasses into a cargo van while the slaughter was still underway.

Elsewhere in Williamsburg, on Kent Avenue at Cooper Street, kapparot workers were not keen on letting us photograph the ritual:

This year's Sunday and Monday protests included references to the Holocaust and sustained shouted provocations by a handful of the several dozen activists, prompting condemnation from the Anti-Defamation League and members of the Hasidic community. Deych said that she felt the events were unfairly portrayed by Gothamist, noting that many of the protesters were simply debating kaporos practitioners on the finer points of Jewish law and animal cruelty, and saying that where she saw signs referencing the Holocaust, she asked protesters to put them away.

There was also, she said, pronounced, in some instances physical aggression against the protesters by Hasidim—a slaughter helper also flicked blood at Gothamist photographer Scott Heins. One account, of two female protesters being assaulted by seven people on the way to their car, could not be confirmed by police.

Deych said that following a protest on Sunday night, "I can’t tell you how many people came over to us and were borderline physically violent against people like me, against women. What happened was the guys in our group felt very physically protective of us."

"If you poke someone long enough, you’ll react," she said of Monday's outbursts. "It didn’t at all start out that way."