Are Latest Subway Deaths A "Wake Up Call" For MTA Or Just More Blood On The Tracks?

In the wake of several high profile subway fatalities over the last few months, Transportation Commission Chairman James Vacca held an emergency hearing yesterday to discuss what can be done to prevent more subway-related deaths from occurring. "Did you get a wake-up call?" Vacca asked MTA officials in lower Manhattan on Thursday. But for the most part, they offered wet band-aids for open wounds—and neither council members, TWU representatives, nor the MTA officials seemed very satisfied by the end.

"Do you think the last several weeks were a wake-up call regarding this issue?" Vacca continued, "because it seems to me that while we've had these problems for some time, not until recently are we contemplating such a concentrated attack like the one I've heard today." While the MTA maintained that it was an issue they've always been concerned about—they hope to "enhance the message" now—unfortunately, there was little indication of any real action to take place in the immediate future to improve things. 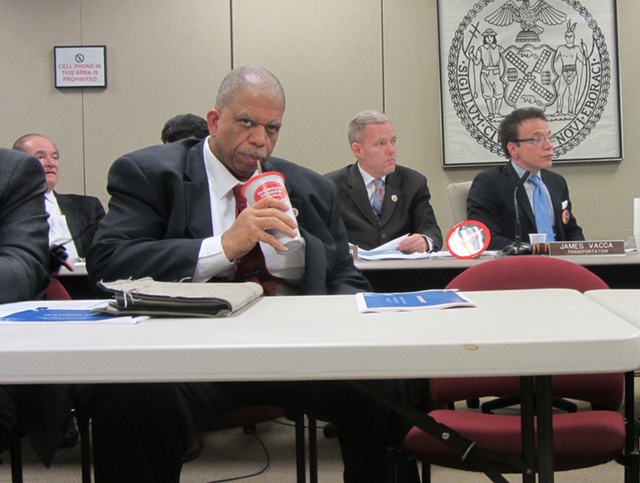 The initial MTA presentation covered the same areas as the one New York City Transit president (and acting MTA CEO) Thomas Prendergast delivered to a Transit Committee meeting a few weeks ago. They politely shot down several ideas that have been proposed in recent weeks, including platform doors (too expensive and problematic to install), intrusion sensors (not happening anytime soon), trains slowing down entering stations (too much congestion on platforms), and more MTA employees in stations (not in the budget). In the end, there's only two strategies to their "concentrated attack": an education campaign and "Help Points."

To that end, their customer awareness campaign will include new detailed posters, brochures, subway car cards, and enhanced train and station announcements. There will be print, online, and television advertisements, although we'd be impressed if you actually saw them—you'll have to watch the Transit Transit show to see it on TV as of now (Vacca made it very clear he wants to see the PSA on more major stations).

The most significant change will be the installation of "Help Points," which will allow riders to hit a button to alert authorities about emergencies (though they don't allow straphangers to stop trains from entering the station, as they do in other cities). Those will initially be implemented at the Brooklyn Bridge 4/5/6 station, and the 23rd Street 4/5/6 station. In 2013-2014, another 114 stations will be equipped with them, and the other 352 stations will be equipped between 2015-2019.

Councilman David Greenfield asked the pressing question: how exactly will those "Help Points" help? Carmen Bianco, the MTA's Senior Vice President for Subways, explained that the calls go to a rail control center, who can then contact the train operator to inform them if someone is on the tracks. But the calls don't go directly to the operators, and there's no emergency way to turn off power immediately if need be—a point Greenfield pursued during the tensest conversation of the afternoon. "It seems like running to the 'Help Point,' pressing the button, having the conversation, finding the actual train—this could take 30, 40 seconds," the Councilman speculated.

Greenfield said he wanted the MTA to roll out an educational campaign to explain to people what to do when they fall onto the tracks:

: Not answering the question really leaves people with no guidance in a nightmare scenario. I say give them a shot, give them some advice...I think it's only reasonable—once again, I know it's not a normal situation, but it's kind of like a plane. When a plane's going down, they tell you, 'Grab the oxygen, put it on your mouth.' It's not a common event, I'm certain it probably happens about as frequent as people getting hit by a train. It's probably one-in-ten-million or so. But still, there's a plan. In case of emergency, here's what you do. I think that it's incumbent upon the MTA, I know you don't want to ask right now, I'm asking you to please come up with a plan and publicize the plan and let people know. In case of emergency, here's what you do. Fair enough?

Bianco: Fair enough. Again, if I can comment. The emphasis we're trying to place today—

Bianco: —is that we really want our customer's to stand back from the edge.

Greenfield: We have no disagreement.

Bianco: It's the one thing we know that will work.

Greenfield: We have no disagreement. What I'm saying is, in case of emergency, there should be guidance. I think it is somewhat irresponsible to insist on not giving guidance for falls, because the reality is we know that emergencies do happen, and I think people are entitled to guidance, and certainly you don't want people like me or the media speculating, and you guys are the experts. So do the research, figure it out, come back to us and let us know in case you didn't follow the instructions...you did something terrible where you accidentally ended up on the tracks, here's what you should do. I think it's only fair.

As we noted, the presentation was mostly the same as the one Pendergrast presented two weeks ago, with one exception: this time they had graphics! Specifically, they created a video to show the flow of traffic on the platform and trains, to better illustrate why slowing down the trains—an idea that the TWU is pushing for hard—would be an utter disaster. You can see a bit of that video below:

In many ways, much of the presentation seemed to be a direct response to the TWU's demands: if trains slow down, then there will be service delays for straphangers, end of story. Vacca asked at another point whether there was a compromise to be made: could train conductors slow down during off-peak hours? "I think to a large degree it's the same situation. In certain places, we're still going to have the overcrowding issues, still have problems with sequencing of trains, it's going to create tremendous running times and inconvenience for our customers...this is not something that is feasible for us to do at this time." 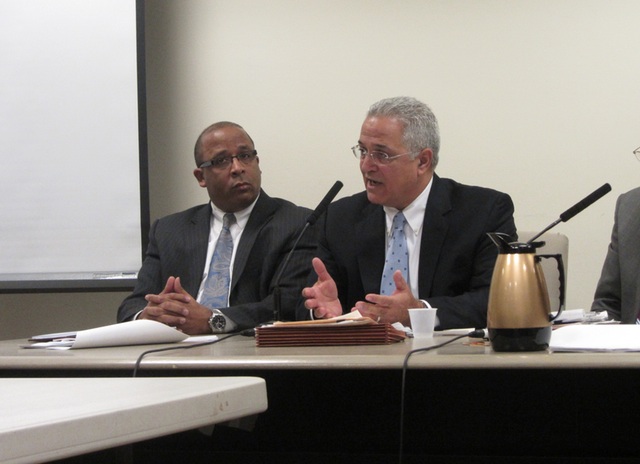 So was this whole hearing just an exercise in managing expectations (from the MTA's standpoint) and paying lip service to frightened straphangers (from the city council's point of view)? Would we walk out with any new insights into how the MTA is trying to curtail these incidents, or would we be as frustrated as Greenfield visibly was? The MTA did reveal that despite their many, many reservations about the feasibility of installing sliding doors across the system, they are "probably" going forward with a pilot program on the Canarsie line (because that is the only line that has automatic train operations). Having said that, ya know, don't get your hopes up about seeing sliding doors on the L train anytime soon...or ever.

"We're going to start the process," Bianco told Vacca. "This is a very complex issue, because you can't just go out there and put doors up. You have to look at the actual design of the station platform. You have to see whether or not you have to reinforce that platform. Electrical power, to add the doors, may have to be enhanced. There is a lot that has to be done in order to get that to a point where we're ready to put up doors. The other thing is, when we're ready to do this, we will go out and do this competitively through a competitive procurement."

Bianco added that yes, at least one firm had come forward with a proposal that would theoretically be revenue-neutral (through advertisements), though he was skeptical about making any guarantees about that. In regards to the sliding doors, he was asked about whether the busiest stations should get them first and if they had more of these incidents (Bianco couldn't answer that, though he did reveal that 18% of the incidents occur between 9 p.m. and midnight), and why the Second Avenue Subway line wasn't going to be considered for doors (despite the MTA taking proposals for it over five years ago). 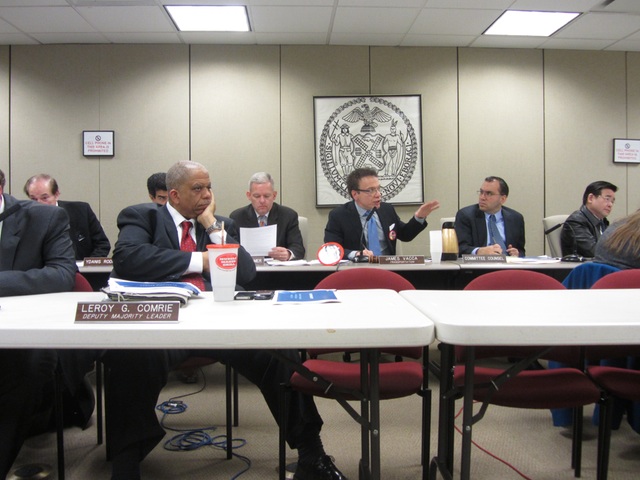 After nearly three hours into the hearing—which included the MTA's presentation, approximately 10 council members asking questions, and the TWU testifying—there were two last presenters who came forward under the dim fluorescent lights of the NYCHA building: an older man who spoke of his uncle—a transit worker—and his support for sliding doors, and Michael Santora of Crown Infrastructure Solutions. He said his team, who had helped design the JFK Air Train platform doors, had approached the MTA to install the doors for free, as long as it could collect revenue from LED video advertising on the barriers.

It's unclear whether this was the company Bianco had referred to earlier, but there was no way to find out: he and the other MTA officials had left the hearing by then. In fact, all the council members, including Chairman Vacca, had left the room as well. There were only a few TWU supporters, a few reporters, and the city council's legal aide, who was left in charge without warning, to listen to these final testimonies. The emergency hearing came to a quiet, unofficial end without its own chairman in the room.

MTA report on subway fatalitiez by

#City Council
#MTA
#subway
#subway fatalities
#train
#original
Do you know the scoop? Comment below or Send us a Tip
A new Gothamist is coming! We’ve moved comments over to our beta site. Click here to join the conversation and get a preview of our new website.