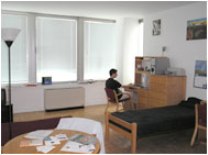 A sophomore at New York University was found dead in his Water Street dorm room on Friday night. The Washington Square News reports that other residents were told about the death on Saturday and that the university did not send out an NYU community-wide email per a request from the deceased students' parents: "The family has asked that they be accorded the utmost privacy, and the university will do its best to honor its wishes and urges the media to do the same."

In September, a freshman apparently jumped to his death from the roof of the NYU dorm University Hall, off Union Square. His death prompted questions about roof safety - Public Safety officers now must guard NYU building roofs and the school has been looking into ways to restrict roof access.

Six NYU students killed themselves in 2003 and 2004, and the school worked to remind students that its Wellness Exchange is open to address health and mental health needs. And the Water Street Residence Hall, located at Water and Fulton Streets, houses 1,200 students and even has a blog (not updated since last Friday).