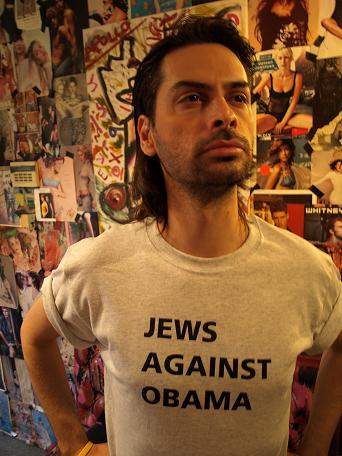 Orchard Street designer Doron Braunshtein (aka Apollo Braun, pictured) is at it again; in March he launched his "Who Killed Obama?" t-shirt and now he's added a new political statement to his line: the $250 "Jews Against Obama" t-shirt.

And that's not the only provocation: Braunshtein also started what he calls a "political movement" as a cute, must-have accessory to the T. His recruitment efforts have gone through his mailing list, Facebook and Myspace.

As with his last design, he explains that he's "selling an idea" that will one day hang "in the greatest museums and galleries in the city." He also wants you all to know how he really feels about Obama, in case it wasn't clear:

"I am a true anti-Obama New York Jew. The word on the street is that New York Jews will vote for McCain anyhow. The majority of the Jews – at least the ones that are proud of their religion and practice it – like me, don't want to see Obama – a man who's middle name is Hussein, and his family from his Kenyan father's side is Muslim, as the leader of this great country.

More than that, after Obama's pastor, Jeremiah Wright honored Louis Farrakhan – definitely one of the most racist and anti-Semitic people alive – Obama lost us Jews totally. That made me start this political movement in the first place."

In March, the NY Post quoted Brooklyn Assemblyman Dov Hikind's prediction that Jewish voters would be making "a mass movement toward Sen. McCain" should Clinton lose the nomination.

UPDATE: After the jump, Jennifer Krause, rabbi and author of The Answer: Making Sense of Life, One Question at a Time

, gives us her opinion on Braun's shirt.

If making sweeping generalizations is museum-worthy, Mr. Braunshtein/Braun stands an excellent chance of his Obama t's being immortalized, but probably not beside a Warhol. His "Jews Against Obama" t-shirt is frighteningly reminiscent of the posters one sees in exhibits devoted to the worst kinds of intolerance that have lumped "Jews," "blacks," and "gays" into monolithic groups distinguishable to others only by their religion, skin color, or sexual orientation.

If there is one thing inherited Jewish wisdom demonstrates, whether it be in pages of passionate talmudic discourse or in current public debates on a multiplicity of issues, it is that there is no group-think among Jewish people. Jewish people come from different cultures, different lands, different schools of intellectual thought, and different socio-economic backgrounds. That is why some will vote for Senator McCain, why some already have voted in primary elections for Senator Clinton, and why some proud, principled Jews also will cast their votes for Senator Obama should he be the democratic nominee in November.

As a deeply committed Jew and a proud, engaged American, the last thing I want to see is my religion associated with the kind of base, xenophobic attitude that rules out a candidate because his middle name is "Hussein" and questions his patriotism because his father was a Muslim. Signs all across the Jim Crow South used to read "No N****rs, No Jews, No Dogs." Would you pay $250 for one of those?

#Apollo Braun
#designer
#Doron Braunshtein
#Jennifer Krause
#Jews Against Obama
#LES
#orchard street
#shirt
#t-shirt
#Who Killed Obama?
Do you know the scoop? Comment below or Send us a Tip