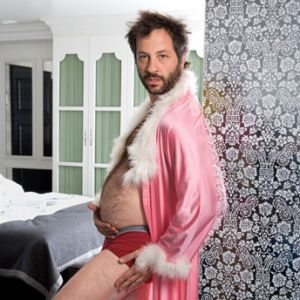 Entertainment Weekly’s #1 “smartest” Hollywood player, Judd Apatow, says “it doesn’t look good” for an end to the writers’ strike any time soon. The well-connected catalyst behind hits like Knocked Up has told the Toronto Star that the studios and producers are prepared to dig in and crush the union’s demand for payment for Internet downloads and movie streaming, “which are expected to become a big part of the industry in the coming years.”

It would cost very little money to end the strike and (the producers) are basically trying to create a way of paying people so that when the Internet explodes, they’ll wind up paying less than they do now to writers. And I don’t think they’re going to get away with it. The writers really failed to stand up for themselves with the DVD (in a previous contract dispute) and they feel terrible about it, and enough of them will not give up that it will have to be resolved in a reasonably fair manner.

The writers have been picketing for over a month now, and the strike is putting talk show hosts like David Letterman in an increasingly uncomfortable position. Along with Conan O’Brien, Jimmy Kimmel and Jay Leno, Letterman has been paying his non-writing staff members out of his own pocket; the Times estimates the subsidy could be bleeding him out of $250,000 a week, and he’s pledged to keep cutting checks through January 7th.

There’s some speculation that Letterman and others might cross the picket line next month and just do interviews, but one unnamed talk show rep told the Times that “all the publicists are telling us their stars won’t cross a picket line and it’s going to be tough booking people.” Here Carson Daly serves as a cautionary tale yet again; when he went back on the air Monday his lead guest was an underwear model.