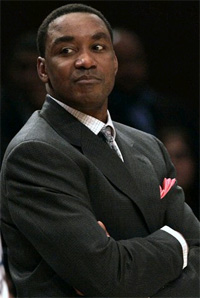 The Post got an earful about Isiah Thomas's accidental overdose on Lunesta sleeping pills from former Knicks senior VP of marketing, Anucha Browne Sanders: "If he tried to commit suicide, I don't want to pounce on him...[but] I don't feel sorry for him. You make your bed, you lie in it."

Last year, Brownes Sander was awarded over $11 million by a jury who believed that Thomas and Madison Square Garden were liable for sexual harassment. Browne Sanders had claimed Thomas frequently called her a "bitch" and a ho," not to mention proclaimed his love for her. Browne Sanders also said, "I've said all along he should have time to reflect on how badly he's treated people over the years. Now that he's not working, he should think about the victims of Isiah. Maybe that's what's going on,"

And, referring to how Thomas claimed that his teenaged daughter was the reason why police were called to his home in Westchester County, she told the Post that she "wasn't surprised at how he used [his daughter], given his general disregard for women." Harrison Police Chief, though, was surprised: He said Thomas is "trying to cover it up. He's not telling the truth. It was a 47-year-old black man. It wasn't his daughter and why they're throwing her under the bus is beyond my ability to understand."

Last night, Thomas's son 20-year-old Joshua told the Daily News via text message, "What's next for my dad is to continue to be a good father, making sure that my sister is all right and being part of the family."

#anucha Browne sanders
#isiah thomas
#knicks
#overdose
Do you know the scoop? Comment below or Send us a Tip