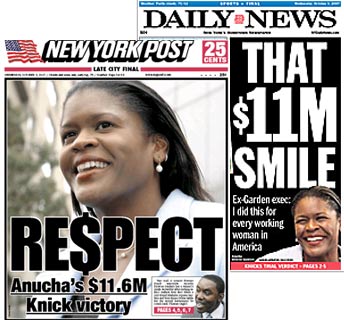 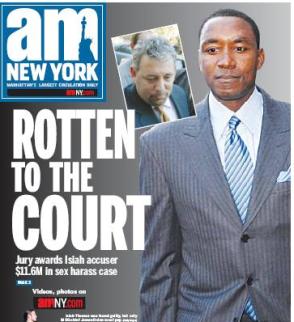 Anucha Browne Sanders gets the cover treatment from the Post and Daily News after a jury believed that Knicks coach and president Isiah Thomas and that Madison Square Garden (the owner of the Knicks) were liable for sexual harassment. amNY, though, chose to put Isiah Thomas on its cover, with an inset of Knicks owner James Dolan, next to the headline "Rotten to the Court" - oh snap!

She also thanked the jury for "seeing through to the truth." When one of the jurors, Sally Anne Foster, was asked if the jury was sending a message to MSG with the settlement, she said, "Obviously, we did." Foster had also said, "She shouldn't have been fired," and that Browne Sanders was "believable." From the Post:

The verdict discredited Dolan's testimony that he fired Sanders for being inept and for tampering with an investigation into her sexual-harassment claims. He had boasted in a taped deposition, "All decisions at the Garden I make on my own."

Asked what the jury thought of Dolan, Foster said, "He should have consulted a lawyer. He should have taken more time to let the whole process work."

"I wouldn't want one of my children working there because of all the language you have to listen to," Foster said. "We don't use those words in our house."

In the Daily News, there are some more quotes from Foster, who noted that Browne Sanders' documentation of the harassment helped her case and felt that former intern Kathleen Decker, who admitted she had sex with Stephon Marbury in a truck, is "awfully young and made some unintelligent choices."

U.S. District Court Judge Gerald Lynch will decide how much Browne Sanders is owed in front and back pay; Newsday explains, "She is asking for about $600,000 in back pay and $9.7 million in damage to her reputation, lost earnings and pension, as well as other compensation. She may also be able to recover attorney fees and costs."

The Daily News' Mike Lupica thinks Isiah Thomas should have been fired after the verdict, "But this is James Dolan's Garden, where Dolan writes an $11.6 million check to Anucha Browne Sanders as if paying off another bad power forward, then issues a statement that this is all the jury's fault. Maybe he should get his old man to buy him a new jury." The NY Times' Jim Dwyer writes it's a "frightening thought to Knick fans everywhere" if the Knicks continue their normal operations, per a statement after the verdict.

Thomas headed to South Carolina for Knicks training camp after the verdict was read. It's unlikely the NBA will reprimand him; the NBA said it doesn't comment on civil cases. And for more reading: