Since last weekend, a coalition of left-leaning groups such as Adbusters and Anonymous have been occupying Wall Street as a mass protest aimed at the corporate culture of greed. To cap off the week of protesting, it seems that some of those corporate-types have decided to play into their own caricatures, by holding a counter-protest titled "Anti Hippy Protester Champagne Toast on Wall Street." You can check out the public Facebook event here, and see a screenshot containing their thesis statement below. 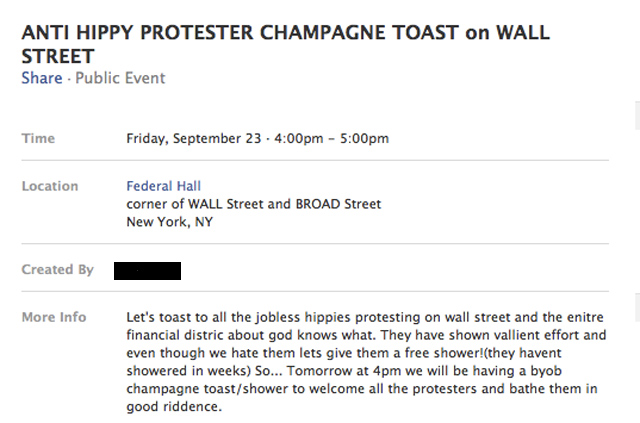 In addition to the full excerpt from their "More Info" above—in which we learn that some rich people don't know how to spell "riddence" despite memorizing that Green Day song during their Phi Kappa Beta frat house—the organizer of the event also wrote the following excerpt on the wall of the event, further elucidating on his hatred for duche's (sic) and love of hippie muffins:

These guys are so pathetic and it was awesome watching them get dragged around and whooped by cops. Hey dumb non tax paying hippies.. You are costing people who actually have jobs more money by making 400 extra police occupy lower manhattan for two weeks ... Can't wait to see you Guys tomorrow - I'll be the guy handing out hippie muffins for free with laxatives baked in so after you shit yourselves uncontrollably we will spray you with champagne like we won a championship game. Only if you haven't been arrested for being a duche before that.

If only the hippie muffins could bring us all together! The toast is supposed to take place at 4 p.m., but some are doubtful the event will actually happen. Patrick Bruner of OccupyWallStreet told us that this is just par for the course when dealing with Wall Street folks down there: "'Get a job! Hippy!' Isn't that the point? I believe this demonstrates the same disconnect we saw at the Cipriani club. The 1% thinks they can get away with stealing our future, and laugh at us while doing so."

#champagne
#counter protest
#Occupation
#occupy wall street
#wall street
Do you know the scoop? Comment below or Send us a Tip