A new nationwide campaign of pro-Palestinian ads comparing Israel to apartheid-era South Africa went up at Metro-North stations this week, coinciding with Passover. The controversial ads, which were sponsored by grassroots advocacy organization American Muslims for Palestine, thoroughly enraged everyone's favorite virulent Islamaphobe, Pamela Geller. And so today, Geller and her group, American Freedom Defense Initiative, have unveiled their own campaign in response, as you can see above and below. 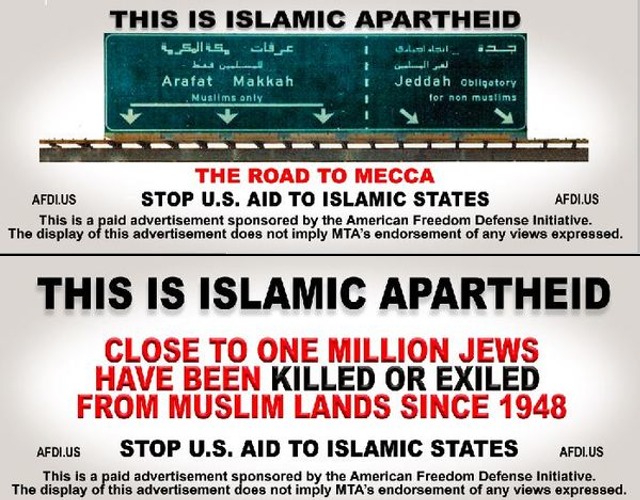 Geller condemned the pro-Palestinian ads, which will appear at 25 Metro North stations and run for four weeks, calling them the "latest blood libel against the Jews," ranting that it's "not surprising that Islamic supremacists would appropriate the propaganda methods of the Third Reich, as they partnered with Hitler and shared the same goal."

The new anti-Muslim ads, which feature "gay" men being hung under Islamic law and a woman in a white burqa getting whipped, have been submitted to the MTA for approval (which they will almost certainly get, considering the group's other controversial ads have also been approved). According to the Post, Geller has requested that these ads be placed at the same stations where the pro-Palestinian ones are, including Fordham and 125th Street.

#ads
#anti-israel
#israel
#metro north
#middle east
#palestine
#Pamela Geller
#passover
Do you know the scoop? Comment below or Send us a Tip