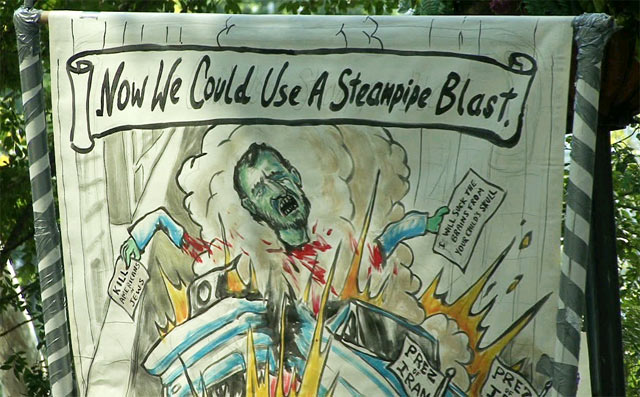 Today's anti-Iran rally, which was to have included politicians but then didn't, attracted thousands of protesters, according to the Jerusalem Post. They gathered across from the United Nations, where the United Nations General Assembly is kicking off; Iranian leader Mahmoud Ahmadinejad is speaking there tomorrow.

Nobel laureate Elie Wiesel said, "Mahmoud Ahmadinejad, go home and stay there, we don't want you here. America doesn't want you here. Nobody wants you," and "called for Ahmadinejad to be indicted by an international war crimes tribunal in The Hague." And the remarks vice presidential candidate Sarah Palin would have given, if still invited to the rally, were released (she says he must be stopped!). Last week, Hillary Clinton, who pulled out of the rally when Palin's presence was announced, said at the State of Israel Bonds dinner, "U.S. policy must be clear and unequivocal. We cannot, we should not, we must not permit Iran to build or acquire nuclear weapons. And in dealing with this threat, as I have said repeatedly, we cannot take any option off the table."

And WNBC's Gabe Pressman is unsparing in his thoughts about the leader: "It's definitely no way to treat a guest and New Yorkers usually are pretty hospitable. But this guy should get lost--or jump in the East River--or just go home." Last year, Ahmadinejad's speech at Columbia was controversial.