Less than a day after politicians in Albany failed to extend New York City's rent regulation laws, two of the biggest forces in Brooklyn real estate met in Fort Greene to present radically different visions for the borough's future.

At a panel entitled The New Condo Boom, one attendee asked the six prominent real estate developers on stage how the existing character of her neighborhood could be shielded from the change that accompanies gentrification.

"You probably do see less diversity [as a result of development], but that's why 421-a is important," said Ken Copeland, the principal at Flank, referring to the annual $1.1 billion tax giveaway that has produced a bevy of luxury and market-rate housing and very little affordable housing.

"Neighborhoods get wealthier, these new people pay taxes and get involved in schools—there are positives and negatives, but this is the path to economic growth." 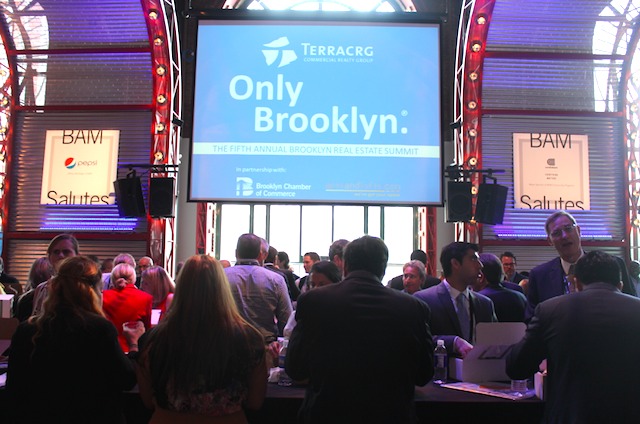 The benefits of bringing wealthier residents into lower income Brooklyn neighborhoods were reiterated by Ofer Cohen, the President of TerraCRG.

"The Bloomberg administration was kind enough to rezone most of Brooklyn, and enable developers to do large scale development," he told Gothamist. "And in turn, people come to create life, to create families, to work and to do everything that we're doing."

Cohen said the renewal of the 421-a tax break was needed to guarantee enough affordable housing for all who demand it. His view, like Mayor Bill de Blasio's, is that the city must continue to incentivize market-rate housing, and that affordability will eventually trickle-down.

"I think the concerns about displacements are temporary if we can develop more," he said. "If we can't develop more, these concerns will get bigger and bigger because there will not be enough housing." 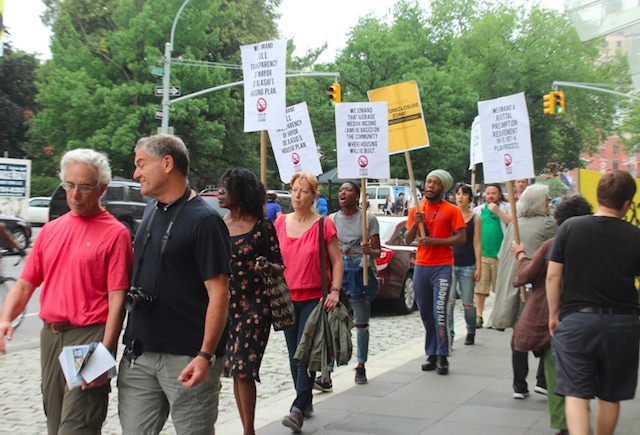 If the summit featured some of the most powerful real estate moguls in Brooklyn, the demonstration outside included several of the most visible anti-gentrification activists in the borough, who were protesting under the banner of a new coalition called the Brooklyn Anti-Gentrification Network, which encompasses more than a dozen smaller organizations.

Alicia Boyd, who founded the anti-displacement group Movement to Protect the People, noted that the 421-a tax break rewards developers for units that are still much too expensive for the majority of Brooklynites.

“Our gap between the poor and rich is getting wider and wider,” she told Gothamist. “You're now feeling that, the deep sense of poverty and disempowerment. That's happening because this city is driven by real estate.”

Boyd is an active coordinator of the Brooklyn Anti-Gentrification Network, which calls itself “the 1st-ever grassroots borough-wide coalition to fight gentrification.” The coalition's ten point platform calls for an end to the 421-a tax break, strengthened protections for rent regulated apartments, and a new process for electing community board members, among other demands.

Imani Henry, the leading organizer of the group Equality for Flatbush, which helped plan B.A.N.'s public launch, said it dawned on different groups to start coordinating their actions after realizing they were doing the same work in different parts of the borough.

"We knew that we couldn't do it all by ourselves as just Equality for Flatbush," he said. "We started meeting with different groups, and that became, let's plan a network with all of these groups in Brooklyn, Bushwhick, Sunset Park, Flatbush, Crown Heights...what [developers] are most afraid of is if we become a bigger and badder network." 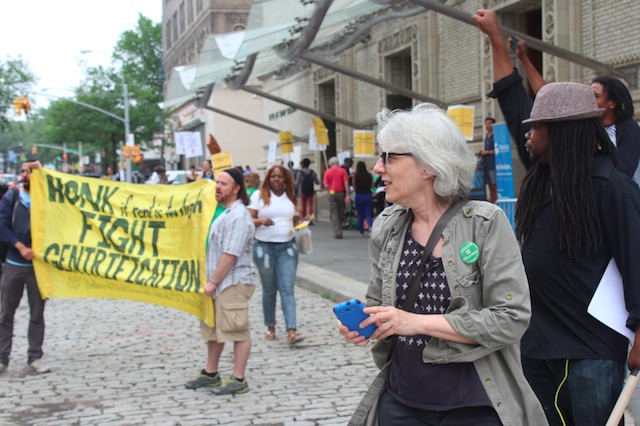 After protesters began heckling summit attendees, security guards erected metal barriers outside the entrance. Drivers obliged a sign held by a protester that stated “Honk if rent is too high,” and passersby approached demonstrators to find out what was happening.

Terrance, a professor who was walking to his apartment near the protest, told Gothamist that his landlord called him last week to let him know he had just sold the property. Although Terrance had lived in the apartment for nine years, he now had to find a new place to live before August.

“I've been taking days off from work so I can go and look for places,” he said, clutching a B.A.N. flier in his hand. “I have no idea where I'm going.”

Asked if he thought organizing against displacement could help his situation, Terrance seemed skeptical.

“It depends on if the officials back it,” he said. “Rallying together will work, but it will take some time. Look at everything going up around us,” he said, waving up at the glass plated high rises surrounding the demonstrators. “How can you stop that?”

Aaron Miguel Cantú is an investigative journalist and researcher in Brooklyn.