Protesters marched through the streets of Brooklyn on Saturday, fed up with a wave of gentrification that they say is enabled by their elected officials.

"I think they're engines of gentrification," 32-year-old Bed-Stuy resident Mike Bento said, referring to the city's politicians. "[Mayor de Blasio] talks in his speeches about being your friend, but in reality, behind closed doors, he's taking that money from the developers, and then doing what they want."

The demonstration targeted "gentrification, racism, and police violence," according to a press release from the Brooklyn Anti-Gentrification Network (BAN), which helped organize the march. Protesters stopped at Barclays Center, Ebbets Field Apartments, and the Bedford-Union Armory, all of which have been at the center of debate over gentrification in the borough.

Melissa Maldonado, 36, observed the protest outside of the Barclays Center, and described her own Williamsburg neighborhood as "the epicenter of gentrification." She called the protest "long-overdue," mentioning how she'd seen many of her former classmates and friends displaced due to rising rents.

A service coordinator for Community Access, which helps New Yorkers with mental illnesses find housing, Maldonado described how her clients face an almost-constant threat of displacement.

"Lower-income people have absolutely nowhere to go," she said. "They have no one really championing for them, other than grassroots movements like this." 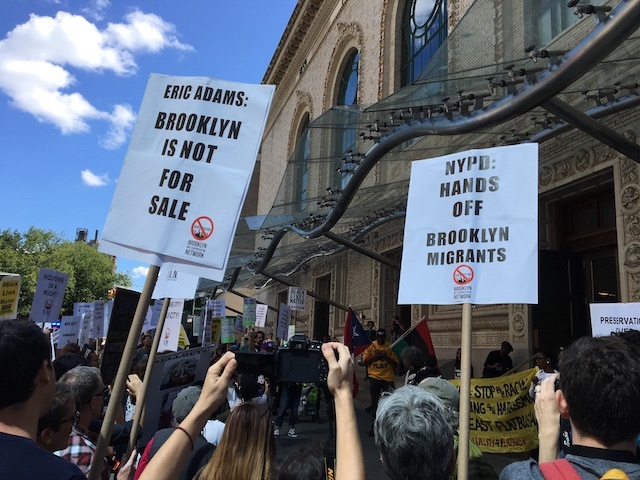 The march stopped for a brief rally outside of BAM, the Brooklyn Academy of Music. (Libby Torres / Gothamist)

Alicia Boyd, one of the main organizers of BAN and the founder of Movement to Protect the People, said the protest had applied for a sound permit directly in front of the Barclays Center, but was rejected.

"We know that this in Laurie Cumbo's district, she knows that we are anti-Laurie because of the Bedford-Union Armory, and she knows that this is a way for her to get back at us, to deny us our sound permit," Boyd said. (An NYPD spokesperson says the sound permit was not denied outright, but was instead granted for an area adjacent to the Barclays Center.)

Cumbo has come under fire from grassroots organizations like BAN for her initial support for the Bedford-Union Armory development in Crown Heights. Although the developer's proposal for the property would set aside 50 percent affordable units, only 18 out of a total 330 are currently set aside for renters who make 37 percent of the Area Median Income, or $31,068 a year for a family of three. Cumbo has since backed off of her support for the Armory project, but chants of "Fuck Laurie Cumbo!" were popular amongst protesters.

Two of Cumbo's opponents in the 35th District race spoke to the protesters outside the Ebbets Field Apartments.

"We can do something about [gentrification]. We do have a voice. We can stop the giveaways, we don't have to give it up," Democrat Ede Fox, who faces Cumbo in Tuesday's primary, told the crowd. "We don't have to let the real estate industry run this show!"

Christine Parker, who is running as a Republican, said that the issue of gentrification "has nothing to do with party affiliation, it has to do with human rights."

A construction worker named David, 23, who declined to give his last name, watched the protest pass on his break from his job. "Money talks," he told us. "They can protest all they want."

David said he has worked on a number of remodel sites meant for wealthy renters. "They're gonna kick the poor [out], and they're gonna bring in the rich. That's how it is. That's America, you know?"

#bedford union armory
#gentrification
#laurie cumbo
Do you know the scoop? Comment below or Send us a Tip