Dozens of activists from the Brooklyn Anti-Gentrification Network, the Movement to Protect the People, and many other community groups protested outside Brooklyn's Borough Hall yesterday, denouncing Borough President Eric Adams and demanding that the city's community boards be given veto power over land use proposals and be elected, not appointed by the Borough President, as they are currently.

This action comes just over a week after the City Council approved Mayor de Blasio's controversial affordable housing plan, which critics fear will pave the way for still more gentrification across the city. 50 of 59 community boards voted down the plan, but that didn't do anything to stop it from going through the City Council: community boards play a purely advisory role, and can't veto any proposals that come their way. Each community board has 50 board members, half of whom are nominated by their district's City Council member, and all of whom are appointed by the borough president.

"That puts a lot of power in the hands of the borough president, who might be more pro-development than pro-people," said Alicia Boyd, who led yesterday's protest. "There's not one black community in Brooklyn that's not being targeted for gentrification. You know who's at the helm of that? Eric Adams. He sold us out. Every black community is being gentrified."

Boyd, along with fellow advocates Pamela Yard and Janine Nichols, has filed a lawsuit against their own community board, CB 9, which encompasses south Crown Heights, Prospect Lefferts Gardens, Wingate, and part of north Flatbush. The suit makes a number of allegations against the community board, most of which accuse the board of violating its own bylaws and the city charter in an effort to silence community members who spoke out against a study that would look at rezoning the neighborhood in a manner similar to East New York. According to Boyd, eight people—including herself—have been arrested at CB 9 meetings, at which they spoke out against the study.

Boyd added, "my community board members are a disgrace. They curse at us. They yell at us. They physically assault us. When you do a FOIL for them, they respond, 'Fuck you.'"

CB 9 hasn't responded to a request for comment on these accusations, or the pending lawsuit.

These advocates also accuse Adams of trying to seize control of CB 9 by appointing 18 new board members to Community Board 9, while appointing an average of 6 to all other community boards in Brooklyn. Boyd filed a FOIL request asking Adams for the resumes of the people who were appointed to the board, but says she received copies that were so redacted they were unintelligible; she's now suing him separately for failing to comply with the FOIL request.

Adams's office had no comment on any of these allegations, citing a policy not to make statements regarding pending litigation.

Without elected board members, those at the protest said, there's no hope of having the city's community boards be representative of local interests. 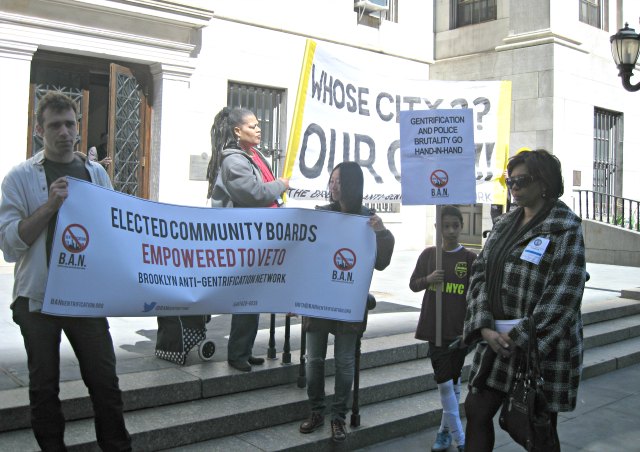 Iman McShepherd, who has lived in public housing near Dumbo for her entire life, said that she's witnessed her community change over her 34 years there—and that might have been different if her community board, CB 2, had been able to veto the wave of developments over the past two decades.

"What I've witnessed in my own community is that they build these luxury buildings, and yet they're trying to force people that have been in the community for 20, 30-plus years out of the community," McShepherd said. "I can't afford to move out of the project apartment that I share with my mom, simply because the rents in these buildings are too high...I remember growing up there was nothing there but old warehouses and things, and I'm happy that they did something with them, but at least let it be affordable for the people that have been in that community."

That's been one of the main criticisms of de Blasio's housing plan: that while it will require developers to provide a certain percentage of affordable housing, the income levels specified in the plan are higher than many locals' own incomes, and might ultimately force them out of the neighborhood.

Throughout the protest, those gathered shouted for Adams to come out from Borough Hall and address them. It didn't happen—but over the course of the hour and a half that the protest lasted, the chants grew angrier. The protestors shouted for "Uncle Adams" to come out, a reference to Uncle Tom.

"That is the biggest Uncle Tom in Brooklyn," Boyd said. "Every black community, he has sold out. He comes with his black skin trying to get us to believe that more of those condo towers is somehow gonna be beneficial to us, and we know it's a lie."

When asked about yesterday's protest, Stefan Ringel, Adams's communications director, said that "few New Yorkers can match Borough President Adams' record of combating tenant harassment, fighting for the protection of affordable housing units, and working to preserve our city's rich diversity. Screaming racial slurs at a community leader who has spent his entire working life contending with the dark impact of racism is beyond irresponsible, but the professional agitators seeking to incite neighborhood unrest already know that."

Though the protest was primarily about the power of community boards in New York, many present spoke about their own experiences with gentrification, which they say could have been prevented or at least mitigated by more powerful and democratic community representation.

"I grew up in [Downtown Brooklyn], on South Elliot place, and right now it looks like Emerald City over there compared to the way it looked when I was growing up," said Sahai H. "Every time I come over here, I feel depressed, because you always want to go back home—but I feel like it'll never be my home again, and I feel like I'm an alien from another planet and I don't even belong here, because I don't deserve to go back home. That's the message I get."

#affordable housing
#borough hall
#brooklyn anti-gentrification network
#community boards
#eric adams
#gentrification
#movement to protect the people
#original
Do you know the scoop? Comment below or Send us a Tip