A large part of covering the DNC, I have learned, involves interviewing people with whom you wildly disagree while somehow keeping blood from pouring out of your eyes. When I saw the protesters outside the Planned Parenthood cocktail party on Tuesday night, each armed with their own enormous sign featuring blown-up images of dismembered babies, I sighed.

I remember the first time I saw such a sign, in the early 90s in Los Angeles, where I grew up. It was made of plywood and around the size of a queen-sized mattress, strapped on its edge atop a sedan that seemed to be held together entirely by Reagan bumper stickers. I was around 5 years old, and so deeply put off by the grisly image—so tall that it barely cleared traffic lights—that I had nightmares for weeks. The driver, I recall, was a slight, graying woman with a clenched jaw that somehow seemed to radiate anger and hatred.

I recognized that set-jaw, low-boiling anger on the faces of the dozen protesters lining the curb outside of Philadelphia’s Union Transfer, but there was one significant difference: Unlike the hunched Methuselah from L.A., these protesters were young. Very young.

“How old are you?” I asked one blonde girl in a pink t-shirt, trying to sound reporterly. Her eyes looked tired and sad. “16,” she told me. I polled the others—none were over 20. 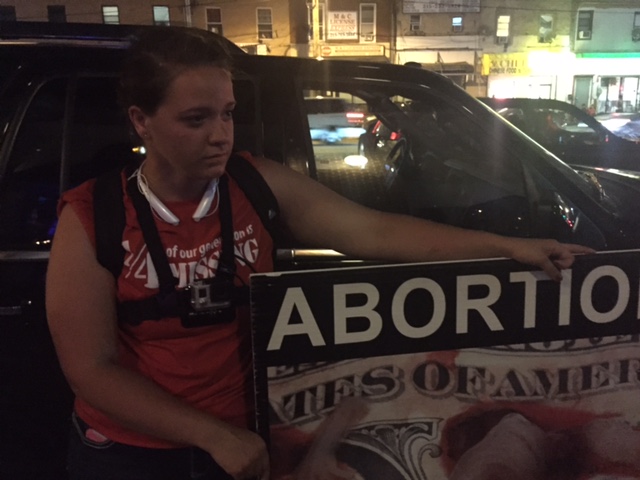 The beleaguered child protesters were with a group called Created Equal, which boasts a mission statement that reads like gibberish dribbled from the mouth of Sarah Palin.

“Created Equal was inspired by Mark Harrington’s vision of human rights defenders uniting to achieve collectively far more than one person,” it begins. What? "Prior to our launch, Mark commented, 'If, at the end of my life, I do not see a long line of young apologists I have equipped behind me, I will have failed.'"

Harrington indeed found a line outside of Union Transfer, but his militia of dead-eyed youths had no apparent effect on the revelers waiting to enter the party. While most of the protesters were content to stand wordlessly in the stagnant heat, one man, an enthusiastic 20-year-old named Sam Riley, was eager to chat. He told me that he protests Planned Parenthood regularly—around two or three times a week—as part of his job at Created Equal.

“Basically it’s missionary work. I don’t make a lot of money—it’s not like, a high paying job,” he said. He said he receives a lot of “personal support” from friends and family members willing to “help him with his passions.”

Riley was by far the most forthcoming member of his cohort, with the rest sneeringly referring me to their organizer. I felt terrible for them, repeating canned lines about child murder, body cams strapped to their chests in case someone waged a drunken assault. One smiling woman leapt from line to pose in front of them, one arm extended for a selfie, the other with her middle finger raised. "This party took a weird twist," one woman commented to her friend as they walked by.

Riley didn't back down, struggling to scream his platform over rousing, passionate shouts of “My body, my choice.”

“I wonder what their names would have been,” he tried to yell, his voice clearly flagging. “I wonder what their professions would have been.” The line outside the bar moved forward, providing a renewed supply of fresh vocal cords every few minutes. It occurred to me that fighting an uphill battle against progress is the calling card of the anti-abortion protesters. The relentlessness of their struggle might almost be admirable, if it weren't so grotesque.

A white Subaru pulled to curb. The doors were flung open, and Salt-N-Pepa’s “Let’s Talk About Sex” poured from inside. If Riley stood no chance before, he was toast now. His voice was shot.

“We wouldn’t condemn our worst enemies to a future like this,” he tried to scream, but it came out a whisper. Salt-N-Pepa, though, was just warming up.

#abortion
#dnc 2016
#planned parenthood
#original
Do you know the scoop? Comment below or Send us a Tip