Anthrax Scientist "Stood to Benefit From a Panic" 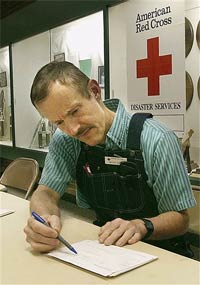 The LA Times, which broke news that government biodefense scientist Bruce Ivins committed suicide earlier this week as federal prosecutors were looking to charge him with the anthrax letter attacks of 2001, now reports that Ivins "stood to gain financially from massive federal spending in the fear-filled aftermath of those killings." Ivins shared two patents for a "genetically engineered anthrax vaccine" and had also applied, with another inventor, "to patent an additive for various biodefense vaccines."

Ivins was aware that the FBI was closing in on him: He attended a group counseling session and revealed "he had bought a bulletproof vest and a gun as he contemplated killing his co-workers at the nearby Army research laboratory." The NY Times writes, "The ranting represented the final stages of psychological decline by Dr. Ivins that ended when he took his life this week."

Even his therapist asked for an order of protection from him, mentioning his "homicidal threats, actions, plans" --the restraining order at The Smoking Gun.

While Ivins' friends and colleagues were surprised about the FBI's interest in him, the Washington Post says "FBI investigators began to focus on Ivins under the theory that he had used his knowledge of anthrax bacteria to pull off the nation's deadliest episode of biological terrorism." Ivins's former colleague W. Russell Byrne told the NY Times the FBI was harassing Ivins, "They searched his house twice and his computer once. We all felt powerless to stop it.” And some question whether Ivins, a vaccine expert, could have turned anthrax spores into the breathable powder that was sent to media organizations and lawmakers through the mail.

The Justice Department did not comment on the investigation, but Ivins's lawyer Paul Kemp issued a statement, "For six years, Dr. Ivins fully cooperated with [the anthrax] investigation, assisting the government in every way that was asked of him. We are saddened by his death, and disappointed that we will not have the opportunity to defend his good name and reputation in a court of law. We assert his innocence in these killings, and would have established that at trial. The relentless pressure of accusation and innuendo takes its toll in different ways on different people, as has already been seen in this investigation. In Dr. Ivins' case, it led to his untimely death." On Countdown with Keith Olbermann, Olbermann pointed out how Senator John McCain told David Letterman years ago that the anthrax seemed to be from Iraq.

#anthrax
#anthrax Attacks
#bioterror
#Bruce Ivins
Do you know the scoop? Comment below or Send us a Tip