Anthony Weiner threw his hat into the NYC mayoral race yesterday with a slick family-pimping campaign video and a flashy new website. So far his comeback has been very carefully stage-managed, but you had to know he'd pull a boner at some point. And today it's being widely observed that the top banner graphic on Weiner's website features an image of the Pittsburgh's skyline, not New York City. At this point you might ask yourself how the hell they screwed that up... and then remember that this is Anthony Weiner we're talking about.

Instead of a NYC bridge, the bridge on Weiner's site appears to be the Roberto Clemente Bridge (also known as the Sixth-Street Bridge). One Pittsburgh resident tells The Hill, "It's the Renaissance Hotel framed through by southern-more tower of the Sixth-Street Bridge; the Gulf, USX, Koppers, Mellon Bank and Keenen buildings are all easily discernible to the left."

Capital New York's Azi Paybarah found another image of the bridge here and attached it to the Weiner website banner for comparison. 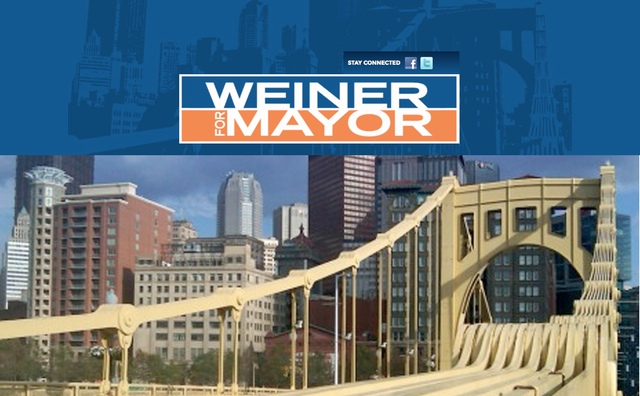 I called and emailed Weiner's office for comment on his latest "big mistake," but have so far received no reply. I guess that leaves me no alternative but to tweet at him...

Update: They fixed it, lazily.

#anthony weiner
#boners
#pittsburgh
Do you know the scoop? Comment below or Send us a Tip