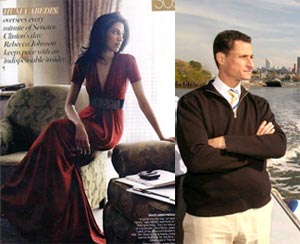 Representative Anthony Weiner explained to the AP why he's spending so much time campaigning for Hillary Clinton, even as the junior Senator from NY trails rival Barack Obama. Weiner said, "I'm doing a lot, but it's largely because I'm dating Huma." Finally--the Post suspected as much last October.

Weiner has admired Abedin, a half-Pakistani, half-Indian native of Saudi Arabia, for a while. In last year's Observer profile of Abedin, Weiner said, "This notion that Senator Clinton is a cool customer—I mean, I don’t dispute it, but the coolest customer in that whole operation is Huma." Weiner's dating past includes, reportedly, Capitol Hill interns and Gigi Stone. And Weiner has been eying the Democratic nomination for 2009 mayoral race.

#anthony weiner
#dating
#hillary clinton
#huma abedin
#love life
#politics
Do you know the scoop? Comment below or Send us a Tip