Anthony Scaramucci's 'News Outlet' Excoriated For 'How Many Jews Were Killed In The Holocaust?' Twitter Poll

Anthony Scaramucci, the brash Long Island hedge fund owner-turned-front-stabbing White House communications director of just 10 days, launched a media outlet earlier this month called the Scaramucci Post. He said at the time, "We have no idea what the Scaramucci Post is and neither do you... so we’ll have to see how the whole thing unfolds." Today, it unfolded further by dipping its toes into Holocaust denial, by offering the Twitter poll, "How many Jews were killed in the Holocaust?" 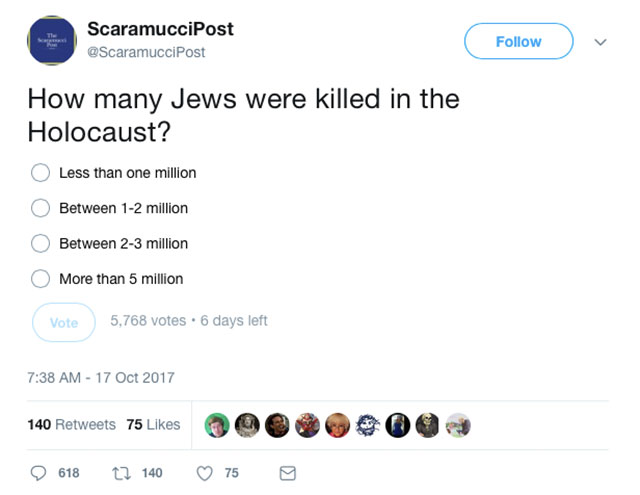 The reaction was swift:

What the actual f— is this, @Scaramucci? https://t.co/LlZ6Q16Utl

This isn’t a fun quiz for Twitter. There already is a correct answer. The existence of this poll insinuates there are opinions to be had.

The Tweet was taken down after 90 minutes. It turns out that Lance Laifer, another former hedge fund owner who masterminded Taye Diggs' social media strategy of following everyone on Twitter, is the one Tweeting for the Scaramucci Post, with the outlet Tweeting, "This poll was put up by @lancelaifer without consulting @Scaramucci who is traveling in London. The poll has been taken down."

This poll was put up by @lancelaifer without consulting @Scaramucci who is traveling in London.
The poll has been taken down. pic.twitter.com/SKaaPZAPow

The intent of the poll was to highlight ignorance of the basic facts of the Holocaust. I take full responsibility for it.

This is @lancelaifer and I apologize if anyone was offended by the Holocaust poll.

Keith Olbermann pointed out, "If an apology includes the phrase 'if anyone was offended' it’s not an apology. This was antisemitic and trivializing. Delete the account."

In an interview with The Hill during the Scaramucci Post's launch party, Scaramucci—who is trying to position himself as more open-minded than others in the Trump White House—said that "the Scaramucci Post would be a millennial-first media company that would distribute its content natively via social media platforms. He has no plans to launch a website anytime soon, but says that he will eventually hire reporters."

In terms of the type of news the Scaramucci Post will publish, he said that it would be true centrist, informative content. He said that right now media companies are either serving the left or the right, he hopes to be “a middle lane” on the information super highway.

“What the president did very successfully during the campaign is he went directly to the American people,” Scaramucci said, adding he hoped to do the same thing. “It’s going to be plain vanilla news that is unfiltered, cold brew news, if you want to say.”

It seems like the poll was meant as a twisted way to continue morning commentary on the Anti-Defamation League's shock that there was an Anne Frank children's costume being sold for Halloween:

Hard to see how this offensive idea made it this far, but thankfully this costume has been removed from the market: https://t.co/pZQM6T7NmV

The Scaramucci Post Tweeted, "Thoughts?" while retweeting the ADL's Tweet (the Holocaust poll was also posted at 7:35 a.m.):

In fact, the publication is so devoted to its social media strategy that it has no journalists, no articles and no website — apparently by design. “You’ll find that if you don’t have a website, guess what? You don’t have any server charges,” he said.

Anyway, it seems like it's time for some front-stabbing:

Source close to @Scaramucci says he’s “furious” about Holocaust-denying tweet. It will be taken down as soon as possible...1/2

2/2 and “he’s going to take immediate disciplinary action. At least one person is getting fired.”

#anthony scaramucci
#Holocaust
#holocaust denial
#lance laifer
#scaramucci post
Do you know the scoop? Comment below or Send us a Tip