Another Tuesday Showdown for Clinton and Obama 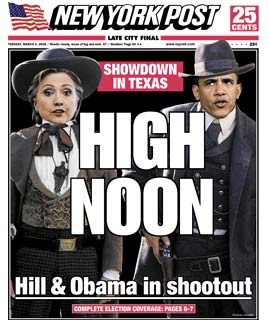 Today's big Texas primary, the Post has delivered a cover with Hillary Clinton and Barack Obama as old West gunslingers. And since Obama's hand in on his gun, it makes sense the headline for the story is, "Barack Goes For Hill Kill." (Obama believes in gun control, though he backed a law allowing retired cops to carry concealed weapons).

At any rate, in spite of Obama leading and her campaign desperate for wins in Texas and Ohio (and wins in Vermont and Rhode Island would be nice too), Clinton said she'd continue to her presidential run after today, "I believe we are going to do well tomorrow and I believe that's going to send a very significant message to the country. Then we move on to Pennsylvania and the states still ahead. We're just getting warmed up."

Both candidates were in Texas campaigning yesterday, with Obama sounding annoyed with reporters about questions, including those about his adviser's meeting with Canadian officials about his position on NAFTA and questions about fundraiser Tony Rezko. Clinton took time to appear on the Daily Show via satellite; part one is below, part two is here.

A Houston Chronicle, Reuters, C-Spain poll shows Clinton leads Obama 46.6% to 43.5% in Texas, while they are essentially tied in Ohio - Clinton has 44%, Obama 44.4%. The NY Times' David Brooks has a column noting Clinton's "Old Politics" vs. Obama's "New Politics," Politico's Roger Simon thinks Clinton has been playing the victim and victimizer and Christopher Hitchens outlines the decline of political rhetoric in Slate. And in the meantime, McCain is looking to seal the Republican nomination.