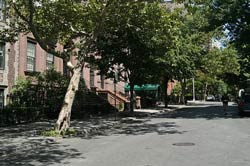 Brooklyn Heights residents may have thought their neighborhood had earned a respite from anti-Semitic graffiti after the arrest and confession of Ivaylo Ivanov, who committed and then confessed to a string of vandalism incidents last year that left Brooklyn Heights peppered with swastikas in spray paint. But last week another wall was defaced with a symbol of hate. The incident involved a a brick apartment building at 22 Remsen St. The swastika was first spotted by Donald Brennan, who owns a nearby building. He told The New York Times "'I was sitting in my car at the curb with my family, I looked over my shoulder and I saw it there,' he said, adding that he felt 'absolutely shocked, kind of sick.'”

Police don't believe that Ivalov is involved with the most recent crime, primarily because he's sitting in jail for his last string of graffiti and the load of weapons police found in his home when they went to arrest him. The owners of the multi-unit building at 22 Remsen St. are Jewish, but they don't believe any of the other tenants are, and can't think of any reason why someone would be lashing out at them specifically.

The Times notes that Martha Spector, who owns the building with her husband, was asked by police not to remove the swastika just yet because it is evidence. “I’m quite anxious to get it off the building," she said.

Untitled photo of Brooklyn Heights street, by nrvlowdown at flickr